Review of Matilda The Musical 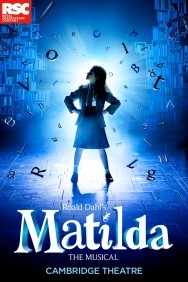 Move over, Billy Elliot. Matilda the Musical takes the trophy for Best British Musical. For years, the gong for Best British Musical has always gone to Billy Elliot, with audience and critics alike flocking back time and time again to the Victoria Palace Theatre. However, the diabolical Miss Trunchbull and the revolutionary spirit of a little girl named Matilda have firmly taken the title from the ballet-dancing boy.

Dennis Kelly’s ingenious adaptation of Roald Dahl’s story about a bright girl, downtrodden by her idiotic parents and sadistic headmistress, who gains telekinetic powers in order to fight these adult bullies, is as anarchic and joyous as any West End show you are likely to find.

Composer and lyricist Tim Minchin, the Australian comic famed for his witty and subversive songs, has struck musical theatre gold with his humorous and often tender score that combines dexterous lyrical turns with catchy melodies. His talent also lies in being able to move story forward and, at the same time, deepening our understanding of the characters. Both Minchin and Kelly prove a match made in heaven, as the pair’s unique styles marry seamlessly with Roald Dahl’s original novel, matching the cruelty and unpleasantness hit for hit.

Although written for children, the story of Matilda is an emotionally complex tale of loneliness and rejection and, in the wrong hands, could have missed the mark completely

Although written for children, the story of Matilda is an emotionally complex tale of loneliness and rejection and, in the wrong hands, could have missed the mark completely. Thankfully, the musical’s director Matthew Warchus has hit the bull’s-eye. He navigates the more emotionally difficult moments with expert precision, never overloading the audience with too much grit, but avoiding drifting into sentimentality. He also utilises Dennis Kelly’s tongue-in-cheek dialogue to cut through any hint of saccharinity.

Rob Howell’s set design with its alphabet blocks that spill out into the auditorium evokes the child-like chaos of a school playroom, but where Howell has truly excelled is in the practical staging of the production. Classroom desks miraculously rise and lower from the floor, bookcases slide in and out of view to create the various environments in the story, and playground swings descend from above, only to disappear the next. All this achieved with an exuberant giddiness akin to any naughty kid.

Choreographer Peter Darling has created some of the most unique and comedic movement ever to be seen in the West End. The pin-point precision and energy of the choreography dazzles and delights at every turn, leaving the audience stunned, especially when Mrs Wormwood salsas and rumbas with her greasy dance teacher Rudolpho, played with sleazy brilliance by Jason Winter.

It is more than obvious that the cast of Matilda love every second of it. The children seem to be in charge on the stage, particularly the feisty Anna-Louise Knight, one of three young stars in the making playing Matilda. Haley Flaherty brings a mouse-like tentativeness to the valiant Miss Honey, and Kay Murphy and James Clyde are memorably grotesque as Mrs and Mr Wormwood, Matilda’s bullying parents.

However, the star turn of the evening is Craige Els as Miss Trunchbull, the psychotic headmistress, hell-bent on crushing the spirit and sometimes the heads of the children under her care. Els is both terrifying and comedic, marching around the stage with a hilariously inflated bust and spinning children around the stage by their pig tails, as though she were reliving her hammer throwing days of the past. In one particularly brilliant moment, the intimidating figure of Miss Trunchbull begins to twirl a ribbon in a rhythmic gymnastics routine. Watching the huge bulk of the woman gracefully spin through the air with such ease will be seared into the retinas of the audience for weeks, even months to come!

Matilda the Musical has it all: wonder, wit, magic and tenderness. It is no wonder the show sells out faster than Bruce Bogtrotter can eat the gigantic chocolate cake.