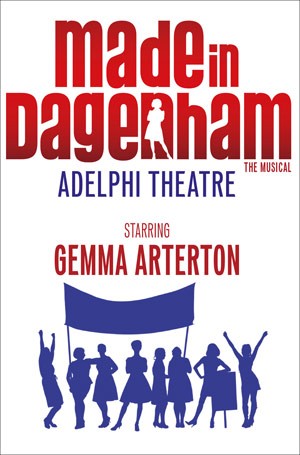 Monday will see tickets go on sale for the hugely anticipated stage musical of Made in Dagenham. Based on the 2010 feature film of the same name, it deals with the 1968 Ford sewing machinists strike and tells the compelling story of the women who walked out of the East London car plant in protest against sexual discrimination and demanded equal pay.

The musical will be written by Richard Bean, the man behind the National Theatre’s smash-hit One Man, Two Guvnors. With a score by David Arnold and lyrics from the mind behind Jerry Springer The Opera, Richard Thomas, this impressive creative team is headed up by Headlong’s artistic director Rupert Goold. After the success of his latest musical American Psycho at the Almeida Theatre, it’s no wonder that the whole of London’s theatreland is abuzz with excitement about Made in Dagenham.

The full cast has yet to be announced, but reports are that Bond girl Gemma Arterton is top choice to play the musicals lead part of Rita. These reports don’t seem to be unfounded, as Arterton has played Rita in two workshops of the production and seems to have a taste for the London stage after her recent success in The Duchess of Malfi at the Sam Wannemaker Theatre this year and her previous roles in the Globe’s 2007 production of Love’s Labour’s Lost and The Little Dog Laughed in the West End.

The MD of Stage Entertainment Rebecca Quigley, who will co-produce the show with Number 9 Film's Stephen Woolley and Elizabeth Karlsen, has gone on record to say the show will be ‘a purely original British musical, following in the footsteps of Billy Elliot’.

The BAFTA-nominated William Ivory film of Made in Dagenham was directed by Nigel Cole and starred Sally Hawkins as the unlikely champion of the workers as well as Andrea Riseborough, Geraldine James, Miranda Richardson, Rosamund Pike and Jaime Winstone, along with Daniel Mays and Bob Hoskins.

Made in Dagenham is starting to become the hottest ticket in town, so make sure to get your hands on them before it’s too late!