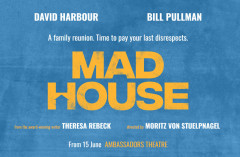 David Harbour and Bill Pullman will star in the world première of Theresa Rebeck’s dark and funny new play Mad House. Directed by Moritz von Stuelpnagel, the production opens on 26 June at the Ambassadors Theatre, with previews from 15 June, and runs until 4 September.

Theresa Rebeck said today, “There are those projects when the stars simply align, and to see David and Bill together on stage is beyond my wildest dreams. I’m very much looking forward to being back in the rehearsal room with Moritz as we bring the play to production here in London.”

David Harbour added, “So excited to return to the London stage with Theresa’s blistering new dark comedy. It features two of my favourite things: the abyss of madness that lies at the pit of every family as they stare blankly, incomprehensively into the nature of our fleeting existence, and real estate.”

The production reunites Rebeck and von Stuelpnagel following their collaborations on Bernhardt/Hamlet and Seared.

Public on sale is 12pm today.

A family reunion. Time to pay your last disrespects.

In rural Pennsylvania, Michael has returned to his childhood home to look after his dying father. His siblings Ned and Pam soon arrive, determined to work out how much money Dad actually has left and how they're getting their hands on it.

David Harbour and Bill Pullman return to the West End in the world première of Theresa Rebeck's dark and funny new play. Directed by Moritz von Stuelpnagel, Mad House opens at the Ambassadors Theatre this June for a strictly limited season.

Veteran of the stage and screen Bill Pullman returns to the London stage to play Daniel – he previously appeared in All My Sons at The Old Vic. His other theatre work includes The Other Place (Samuel J. Friedman Theatre), Oleanna, The Goat, or Who Is Sylvia? (John Golden Theatre), and Off-Broadway, The Jacksonian, Peter and Jerry - Drama Desk Award for Outstanding Actor in a Play, and The Sad Lament of Pecos Bill on the Eve Killing His Wife Killer's Head/Action. For television, his work includes The Sinner (as series regular Harry Ambrose), Halston, Ten X Ten, 1600 Penn, Innocent, Torchwood (as series regular Oswald Danes), Too Big to Fail, Nathan vs. Nurture, Revelations, American Masters, The Virginian, and Fallen Angels; and for film, his extensive work includes The High Note, Dark Waters, The Coldest Game, The Equalizer 2, Trouble, Battles of the Sexes, A Thousand Junkies, The Ballad of Lefty Brown, LBJ, Independence Day: Resurgence, American Ultra, The Equalizer, Peacock, The Killer Inside Me, Your Name Here, Surveillance, Phoebe in Wonderland, Bottle Shock, You Kill Me, Nobel Son, Dear Wendy, Igby Goes Down, Ignition, A Man is Mostly Water, Titan A.E., The Guilty, Brokedown Palace, Zero Effect, Lost Highway, Independence Day, Mr Wrong, Casper, While You Were Sleeping, Wyatt Earp, The Last Seduction, Malice, Sleepless in Seattle, Sommersby, Singles, A League of Their Own, Newsies, The Accidental Tourist, Rocket Gibraltar, The Serpent and the Rainbow, and Ruthless People.

Theresa Rebeck is a prolific and widely produced playwright, whose work has been staged across the globe. Her work on Broadway includes Bernhardt/Hamlet, Dead Accounts, Seminar and Mauritius. Other notable New York and regional plays include Seared (MCC), Downstairs (Primary Stages), The Scene, The Water’s Edge, Loose Knit, The Family of Mann and Spike Heels (Second Stage), Bad Dates, The Butterfly Collection and Our House (Playwrights Horizons), The Understudy (Roundabout), View of the Dome (NYTW), What We’re Up Against (Women’s Project), Omnium Gatherum (Pulitzer Prize finalist). As a director, her work has been seen at The Alley Theatre (Houston), the REP Company (Delaware), Dorset Theatre Festival, the Orchard Project and the Folger Theatre. Major film and television projects include Trouble - with Anjelica Huston, Bill Pullman and David Morse (writer and director), NYPD Blue, the NBC series Smash (creator), and the female spy thriller 355 (for Jessica Chastain’s production company). As a novelist, Rebeck’s books include Three Girls and Their Brother and I'm Glad About You. Rebeck is the recipient of the William Inge New Voices Playwriting Award, the PEN/Laura Pels Foundation Award, and a Lilly Award.