by Best of Theatre Staff on Wednesday 11 December 2019, 9:38 am in Cast Changes and Announcements 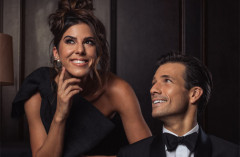 Ambassador Theatre Group Productions, Paula Wagner, Nice Productions and LPO are delighted to announce that Aimie Atkinson will play ‘Vivian’ and Danny Mac will play ‘Edward’ in the smash hit PRETTY WOMAN: THE MUSICAL at the Piccadilly Theatre from 13 February 2020 where it will play for a strictly limited engagement of 46 weeks. Full casting to be announced soon.

Producer Paula Wagner said today “After an extensive search, we have found our ideal Vivian and Edward! Their talent and undeniable charisma will take Pretty Woman: The Musical to new iconic heights. When I met Aimie, I was completely captivated by her wit, warmth and dynamic presence. Danny, has all the great qualities of a leading man and will make the perfect Edward. I can’t wait to see these two power-house talents together on stage”.

Director and Choreographer Jerry Mitchell said today “When I first saw Aimie I knew I wanted to work with her. Her star quality, attack and voice in SIX leapt off the stage. I have wanted to work with the very talented Danny Mac for ages. His voice is perfectly suited for Bryan Adams and Jim Vallance’s romantic score. Together, Aimie and Danny will make the West End production of Pretty Woman: The Musical sizzle, and with them we’ll all be falling in love again with Garry Marshall and JF Lawton's romantic story”.

Aimie Atkinson was in the original West End cast of the hit musical Six at the Arts Theatre and was nominated for an Olivier Award for her performance. Her other credits include Daniela in In the Heights at King’s Cross Theatre, Serena in Legally Blonde at Kilworth House and Chloe in Never Forget - The Take That Musical and Luisa in Zorro The Musical, both on national tour. Aimie is also the winner of the prestigious BBC Radio 2 Voice of Musical Theatre Award.

Danny Mac can currently be seen as Bob Wallace in White Christmas at the Dominion Theatre in the West End. His many other theatre credits include Joe Gillis in Sunset Boulevard and Nino in Amelie, both on national tour, Gabey in On The Town at Regent’s Park Open Air Theatre and the West End productions of Wicked and Legally Blonde. Danny captured the nation’s hearts and received overwhelming support during his incredible time on BBC1’s Strictly Come Dancing, making it all the way to the final.

PRETTY WOMAN: THE MUSICAL had its world premiere at Chicago’s Oriental Theatre in March 2018 before transferring to Broadway where it ran at the Nederlander Theatre. The German production opened in Hamburg at the Stage Theater an der Elbe on 29 September 2019 to rave reviews and sell out business and the US tour will begin in September 2020.