Last chance to see the critically acclaimed production of A Doll’s House! 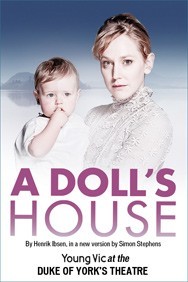 Carrie Cracknell’s critically acclaimed Young Vic production of A Doll’s House will complete its West End run on 26 October 2013 as previously announced, prior to a New York run at the Brooklyn Academy of Music (BAM) early next year. Praised by audiences and critics alike, A Doll’s House first premiered at the Young Vic in July 2012. After returning in March this year for a second sell-out run, A Doll’s House transferred in August to the Duke of York’s Theatre in the West End.

Leading lady Hattie Morahan made her West End debut playing the role that saw her named best actress at both the Evening Standard and Critics’ Circle awards. Morahan’s portrayal of Nora Helmer, the complicated mother that walks out on her entire family, caused critics to say such things as ‘a once-in-a-lifetime performance' (The Sunday Telegraph) and ‘a bravura performance that elevates Morahan to the front rank of British actors’ (The Guardian). Joining Morahan on the stage of the Duke of York’s and now BAM in New York is Dominic Rowan, Nick Fletcher and Steve Toussaint.

With a world-class creative team made up of director Carrie Cracknell, set designer Ian MacNeil, lighting designer Guy Hoare and costume designer Gabrielle Dalton, there’s no wonder why the production is off to New York City.

A Doll’s House is adapted by playwright Simon Stephens, who currently also has his adaptation of The Curious Incident of the Dog in the Night Time running at the Apollo Theatre in London’s West End.

Catch this stunning production of Ibsen’s classic play before it must end on 26 October 2013. Book Now!