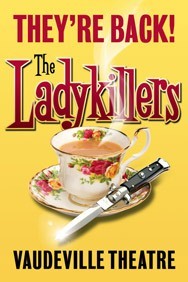 The second time is always a charm as The Ladykillers returns to the West End this summer.

This award-winning farce based on the well-known and much-loved 1955 Ealing Comedy film of the same title has rightfully returned. This time, a brand-new cast resurrects the Ladykillers at The Vaudeville Theatre, following its sell-out run at the Gielgud Theatre in 2012. The production has retained all of its original charm and inventiveness, keeping audiences flooding through its doors night after night.

Written by Graham Linehan, The Ladykillers follows the plot of the William Rose screenplay, but that is where the similarity ends. Under the keen comedic eye of director Sean Foley, this production veers towards the absurd and the slapstick as the farcical story unravels. Set in a squint and ramshackle house in London’s King’s Cross, we follow a band of criminals led by the self-proclaimed mastermind Professor Marcus (John Gordon Sinclair). The Professor’s ‘brilliant’ plan is to rob a train coming into King’s Cross station. To execute this dastardly plot, he needs a safe house to hide himself and his gang; enter Mrs Wiberforce, a lonely and eccentric old widow who is looking to rent out her spare room. Posing as musicians, the motley crew of criminals takes up home in Mrs Wilberforce’s house and, as you can imagine, not everything goes according to the well-designed plan…

The brilliance of this production lies in the individual characters and the actors who bring them to life. The disparate band of thieves include a kleptomaniac, pill–popping degenerate named Harry, played with beautiful idiocy by Ralf Little. Harry endures a running gag with a blackboard that would leave any man with lasting brain damage. Luckily, Harry possesses very little brain to damage.

Simon Day plays The Major, who has a penchant for women’s clothing. Con O’Neill is the psychopathic Romanian whose English is not quite up to scratch as he announces ‘old ladies give me the penises’.

Chris McCalphy is perfectly cast as One Round, the ex-boxer who bumbles round the stage as though he has undergone a lobotomy. However, all these pale in comparison to Angela Thorne’s sweetly naive Mrs Wilberforce, who manages to have the audience rooting for her from the get go.

The whole cast work well together, delivering razor-sharp one-liners at machinegun rate. You have barely recovered from one joke, when another comes whizzing along. Foley’s production also piles on the sight gags with totally irreverence: the furniture spins across the stage every time a train passes, a flick-knife is thrown and then cleverly embedded in One Round’s head, and a stair bannister is impaled through Harry’s chest as though from some medieval battle scene.

You have barely recovered from one joke, when another comes whizzing along.

As the chaos unravels, we are transported from the interior of the house to a car chase on the streets of London, to the rooftops of King’s Cross and finally a to dark and dank train tunnel. All of this made possible by Michael Taylor’s brilliantly inventive set design. The house spins a full 360 degrees to reveal location after location. Miniature radio-controlled cars drive up the front of the house recreating the robbery, pictures spin on the walls as chairs fly everywhere in a house that looks to be built on every different angle possible. It is West End theatricality personified, with each and every set piece filled with hilarious possibilities.

If you are expecting to see a replica of the film, then The Ladykillers is certainly not for you. There is very little of the Ealing Comedy left in the production, but what it loses in this, it gains in farcical slapstick humour. The pure inventiveness and originality of the staging makes for an evening of hilarity that echoes the flamboyance of One Man, Two Guvnors at the Theatre Royal Haymarket. As the jokes come thick and fast, the audience is left defenseless and they give in entirely to the cascades of laughter that ensue. It is an exuberant and joyous evening at the theatre; let’s just hope the run is extended!