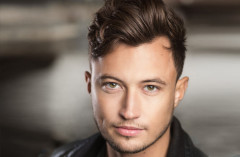 Bat Out Of Hell - The Musical is excited to announce Jordan Luke Gage will be taking on the lead role of Strat from 3 September.

Gage made his West End debut as Hoffman in the show, whilst also performing as an alternate Strat to Andrew Polec.

Gage commented on taking on the role:

"I'm overwhelmed to be taking over the iconic role of Strat in Bat Out Of Hell. Being part of this incredible show and company has been a life-changing experience for me and I have learned so much from working with the extraordinary talent that is Andrew Polec. I want to thank everyone at Bat out of Hell for giving me this opportunity and to thank Andrew for his support and friendship. He has been an outstanding Strat, a deserved winner of the Joe Allen Best West End Debut Award and an inspiration. I wish him love and every success on his journey. I'm so excited to get started! I feel honoured and humbled to be given the chance to sing Jim Steinman and Meatloaf's stunning score and to work with the wonderful people who make up the Bat family; the company, the production and creative teams, the crew and, of course, the fans. Rock and Roll dreams DO come true!"

Simon Gordon who performs as Esquivel in the show will continue to be the alternate Strat.

Bat Out Of Hell – The Musical wowed critics and public alike when it played limited seasons at Manchester Opera House, London Coliseum and Toronto’s Ed Mirvish Theatre in 2017, and has been seen by over 650,000 people to date. It began previews at its latest home the legendary Dominion Theatre on Monday 2 April, with a gala performance on 19 April 2018. It is now booking through to 5 January 2019.

Andrew Polec's final show starring as Strat in Bat Out Of Hell - The Musical at The Dominion, London will be on Saturday 1 September. Tickets are available here:

More exciting news about Andrew will be announced very shortly.

Jim Steinman’s Bat Out Of Hell – The Musical is a romantic adventure about rebellious youth and passionate love, set against the backdrop of a post-cataclysmic city adrift from the mainland. Strat, the forever young leader of The Lost, has fallen for Raven, daughter of Falco, the tyrannical, ruler of Obsidian. It scooped the 'Evening Standard Radio 2 Audience Award' for Best Musical in 2017.