by Best of Theatre Staff on Thursday 14 March 2019, 10:22 am in Cast Changes and Announcements 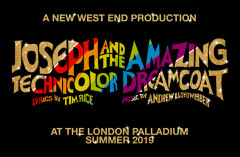 Today Michael Harrison and the Really Useful Group are delighted to announce that Jason Donovan will return to the London Palladium in the new production of Joseph and the Amazing Technicolor Dreamcoat to star as the Pharaoh.

Jason made his defining stage performance as the title character of Joseph in the 1990s, also at the London Palladium, in a sold-out 18-month run which produced a No.1 single and best-selling soundtrack album. It remains one of the most successful revivals of all time. Jason now returns to the show as Pharaoh, who rocks ‘Song of the King’ in the iconic musical by Andrew Lloyd Webber and Tim Rice, soon to be re-imagined in this brand new production.

Joseph and the Amazing Technicolor Dreamcoat will play a strictly limited 11-week season from Thursday 27 June.

Jason joins Sheridan Smith, with the double Olivier Award winning actress recently announced as The Narrator. Casting for the role of Joseph is to be announced soon.

Jason commented: “You never know the measure of a moment until it becomes a memory, and what a moment that was for me. Joseph was a ground breaker in 1991, and what a blast it will be to be back on the prestigious Palladium stage and be part of it all again with a brand new cast in this re-imagined 2019 production. I’m looking forward to breathing new life into Pharaoh and I’m so relieved he doesn’t wear a loin cloth!”