by Best of Theatre Staff on Tuesday 24 September 2019, 12:08 pm in Cast Changes and Announcements 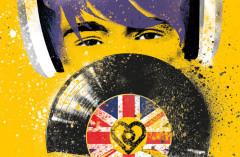 The UK premiere of the irresistible new musical comedy High Fidelity, based on the acclaimed British novel by Nick Hornby (State Of The Union/About A Boy/Fever Pitch), is the second production in Paul Taylor-Mills’ inaugural season at The Turbine Theatre. Directed and choreographed by Tom Jackson Greaves, the first musical to open at the new Battersea Power Station based theatre, runs from 21 October – 7 December, with press night on Friday 1 November 2019.

Rob is the thirty-something owner of a London record shop who’s mastered the art of finding rare vinyl and losing girlfriends. Laura just dumped him, and Rob is totally moving on. Hopefully. Well, there’s a chance it could still work out!

Could Laura actually be “the one?” Might this turn out to be one of the Top 5 Most Romantic Comebacks Ever?!

High Fidelity has designs by David Shields, sound by Dan Samson, lighting by Andrew Exeter, and casting by Will Burton CDG. Helen Siveter will be the Associate Director.

David Lindsay-Abaire is an American playwright, lyricist and screenwriter. He was most recently nominated for two Tony Awards for his work on Shrek The Musical: Best Book of a Musical and Best Score. His work includes Fuddy Meers, Kimberly Akimbo, Wonder of the World, High Fidelity and A Devil Inside. David was awarded the 2008 Ed Kleban Award for America's most promising musical theatre lyricist and the 2007 Pulitzer Prize for Drama for his play Rabbit Hole, which premiered on Broadway at MTC. Rabbit Hole also received five Tony Award nominations, including Best Play, and the Spirit of America Award and was subsequently turned into a film, starring Nicole Kidman.

Tom Kitt is a conductor, musician and composer. Kitt received the 2010 Pulitzer Prize for Drama as well as two Tony Awards for Best Score and Best Orchestrations for Next to Normal. Other composing credits include: If/Then; Bring it On, The Musical; Disney's Freaky Friday; and The Winter's Tale, All's Well That Ends Well, and Cymbeline (The Public's NYSF). Tom is the music supervisor for the new NBC drama, Rise, and was responsible for the music supervision, arrangements and orchestrations for Grease Live! and Green Day's American Idiot on Broadway. His work with Green Day also includes additional arrangements for their Grammy Award-winning album 21st Century Breakdown and their album trilogy, Uno! Dos! Tre! Tom received an Emmy Award as co-writer (with Lin-Manuel Miranda) for the 2013 Tony Award opening number, Bigger. Other television songwriting credits include Royal Pains, Penny Dreadful, and Sesame Street. As an arranger and orchestrator, credits include all three Pitch Perfect films, 2Cellos featuring Lang Lang (Live and Let Die), The Kennedy Center Honors, Everyday Rapture, Laugh Whore, Pippin (Deaf West), and These Paper Bullets.

Nick Hornby is a British novelist, screenwriter, and essayist known for his sharply comedic, pop-culture-drenched depictions of dissatisfied adulthood as well as for his music and literary criticism. Nick’s first book was a collection of critical essays on American writers, entitled Contemporary American Fiction. His first non-fiction, the hugely popular Fever Pitch, an autobiographical account of his life as an obsessive supporter of English football club Arsenal, was adapted to film in 1997 and again in 2005 starring Drew Barrymore. Nick’s first work of fiction, High Fidelity, released in 1995 garnered critical acclaim and became an international bestseller. High Fidelity was adapted to film in 2000 and later to stage in 2006. Nick’s second novel, About A Boy, released in 1998, was also adapted into the much-loved film in 2002 starring Hugh Grant, Nicholas Hoult and Toni Collette, as well as for TV in 2014. His other novels include How To Be Good, A Long Way Down, and Juliet, Naked. Nick is also the author of Slam, which is vintage Hornby for teenagers.

Nick wrote the screenplay for the 2009 film An Education, based on a Granta Magazine essay by British Journalist Lynn Barber, for which Nick received an Oscar nomination. He also wrote the screenplays for Wild, based on Cheryl Strayed’s inspirational memoir about hiking the Pacific Crest Trail, and Brooklyn, an adaptation of Colm Toibin’s novel about the romantic entanglements of a young Irish immigrant to the United States. His work on the latter film earned him his second Oscar nomination.

The TV series Love, Nina was adapted by Nick for television based on Nina Stibbe’s epistolary memoir. Most recently Nick wrote State Of The Union, about a married couple in counselling, starring Rosamund Pike and Chris O’Dowd. The series features 10-minute episodes on BBC Two.