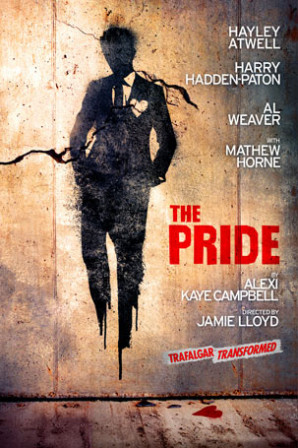 British film and stage actress Hayley Atwell will return to the West End this summer to lead the cast of Alexi Kaye Campbell’s Olivier award-winning play The Pride as part of the Trafalgar Transformed season.

Directed by Trafalgar Transformed’s artistic director Jamie Lloyd, who first brought the play to prominence back in 2008 at London’s Royal Court Theatre, The Pride tells the emotive story of society’s shifting attitudes toward homosexuality between 1958 and the present day.

Hayley Atwell will play the two roles of Sylvia in the past, a former actress stuck in a marriage of convenience; and Sylvia from the present, the best friend of an out gay man. Atwell is best known for her work in the blockbusting Hollywood film Captain America, but who also appeared on the stage in Campbell’s The Faith Machine at the Royal Court two years ago. She is joined on stage at the Trafalgar Studios by Al Weaver, Harry Hadden-Paton and Gavin And Stacy star Mathew Horne.

This new production of The Pride will make the play one of the most successful in the last ten years, having had productions staged in New York, staring Ben Whishaw and Andrea Riseborough, and Sheffield Crucible in 2011 – All very unheard of for a new play.

This will also mark Jamie Lloyd’s third production for the Trafalgar Transformed season, having won huge acclaim for his productions of Macbeth, staring James McAvoy, and Harold Pinter’s The Hot House, with John Simm and Simon Russell Beale in the lead roles.

The Pride opens on 8 August and will play for a strictly limited run until 9 November as part of the Trafalgar Transformed season. Book now to avoid disappointment, as tickets are very popular.