by Best of Theatre Staff on Wednesday 14 March 2018, 11:17 am in Cast Changes and Announcements 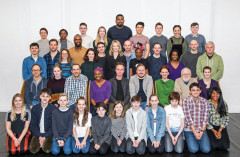 Rehearsals began this week for the third West End cast of Harry Potter and the Cursed Child who will start their performances at the Palace Theatre in London on 23 May 2018 following the final performance from the current cast on 20 May 2018.

In addition Harry Potter and the Cursed Child Producers Sonia Friedman and Colin Callender today announce that on 5 April 2018 at 11am BST they will release a further allocation of tickets for sale for performances from 16 January 2019 – 7 April 2019. Tickets are priced from £15 per part and for every performance there are over 300 tickets at £20 or less per part. Details of any other ticket releases will continue to be listed on the official website, social media channels and the official newsletter.

Harry Potter and the Cursed Child is the eighth story in the Harry Potter series and the first official Harry Potter story to be presented on stage. The critically acclaimed production received its world premiere in June 2016 at the Palace Theatre in London. Subsequently Harry Potter and the Cursed Child has won twenty-four major theatre awards including the Evening Standard Best Play Award as well as a record-breaking nine Oliver Awards - including Best New Play and Best Director - the most awarded play in the history of the Oliviers. The Broadway production will begin previews at the Lyric Theatre later this week on 16 March 2018 and in early 2019 the Australian production will open at Melbourne’s Princess Theatre.

It was always difficult being Harry Potter and it isn’t much easier now that he is an overworked employee of the Ministry of Magic, a husband and father of three school-age children. While Harry grapples with a past that refuses to stay where it belongs, his youngest son Albus must struggle with the weight of a family legacy he never wanted. As past and present fuse ominously, both father and son learn the uncomfortable truth: sometimes, darkness comes from unexpected places.

Harry Potter and the Cursed Child