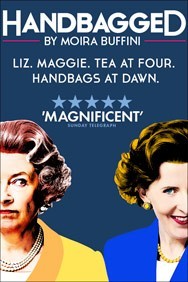 The Queen and Margaret Thatcher take over The Vaudeville Theatre in Moira Buffini’s award-winning play about woman, power and politics.

Plays with Margaret Thatcher and The Queen are fast becoming de rigueur in London’s West End. The duo were seen most recently locking horns in Peter Morgan’s The Audience, with Dame Helen Mirren donning the royal crown opposite Haydn Gwynne as the infamous Iron Lady. Now playwright Moira Buffini has bought the relationship between Prime Minister and monarch to the stage once more in her comic but serious Handbagged.

Originating at the Tricycle Theatre in Kilburn, Handbagged started life as a short piece for its 2010 project called ‘Woman, Power and Politics’. Thankfully, the Tricycle’s artistic director Indhu Rubasingham had the nous to commission a full-length version of the play and after a sell-out run at the Tricycle, this funny and insightful play has been granted a well-deserved West End transfer.

The central idea of Handbagged is that we see the figures of The Queen and Margaret Thatcher in stereo. Buffini has created an older and younger version of both women – Q and Liz, T and Mags. The rest of the play’s 17 characters are played by two male actors transforming into a wide range of public and political figures, including Denis Thatcher, Ronald Reagan, the Duke of Edinburgh, Peter Carrington, Rupert Murdoch and even Nancy Reagan!

The play relies on this meta-theatrical conceit as the four leading ladies comment on the action and each other. This playfulness of the theatrical form takes it above just another evening’s entertainment and into the realms of sharp political theatre.

this play deserves a sell-out audience, and by the looks of things, it is starting to happen

The premise for the events in Handbagged is the infamous weekly meetings between sovereign and first minister, but the major hurdle here is the fact that no one knows what was said behind the gilded doors of the palace, but Buffini does a fantastic job of keeping the dialogue extremely plausible. From the Queen’s disdain at Thatcher’s seemingly uncaring and brutal government when it came to apartheid in South Africa, to Thatcher’s need for royal support throughout the Falkland conflict.

There are jokes abound in Indhu Rubasingham’s sensitive and well crafted production, but behind the satire lies a pursed-lipped clash between two powerful women who possessed disparate views of the UK’s position in the world.

Rubasingham delicately deals with the balancing act between sincerity and infantile slapstick humour. The shifts in tone are oftentimes a sharp 180 degrees and usually done at breakneck speed, showing not only the skill of the cast, but of the director who has managed to judge each gear change with precise emotional insight.

Richard Kent’s patriotic set design gives the company space to move within the slatted whitewashed interior, and space is exactly what the cast need as they strut and posture around the stage in an almost dance-like way.

The cast of Handbagged is little short of spectacular.

The cast of Handbagged is little short of spectacular. Marion Bailey is the absolute dead-ringer for The Queen and she has managed to bring her own blank-faced disapproval to the role. Fenella Woolgar as Mags gives the younger Thatcher a masculine and domineering presence while speaking with the forceful rhetoric so reminiscent of the Iron Lady.

Stella Gonet as the older Thatcher cuts a terrifying figure of the Prime Minister in her later days in power, full of vociferous energy. Clare Holman as the younger HM, Liz, has less to do than the other three, but still manages a few moments of stony-faced disapproval that has the audience in fits.

Jeff Rawle and Neet Mohan play the large collection of other characters. Mohan manages to pull off an uncanny impression of Nancy Regan, while Rawle switches from dukes to foreign secretaries with unfathomable ease. Much of the enjoyment from this play come from the way it’s done – you can just imagine the ‘serious’ version, complete with a 25-strong cast of Britain’s greatest character actors, but that version would never have the fun and energy of this multi-rolling production and the way the characters are able to comment on the show itself. At one particular moment, The Queen actually tries to hurry the action along because she is impatient to get to the interval!

Love them or loathe them, there is no escaping the fact that these two women are a shining beacon of female power, never subservient to men. Of course, they rarely saw eye to eye, but they knew what they stood for and what mattered to them.

It is also worth noting that Handbagged comes from the subsidised sector of theatre, allowing them to take the risks that were needed to create this gem of a play, as I very much doubt the commercial world would have taken such a large creative punt. This is one of the many reasons why this play deserves a sell-out audience, and by the looks of things, it is starting to happen, so book while you still can!

Handbagged runs at the Vaudeville Theatre until 2 August 2014.