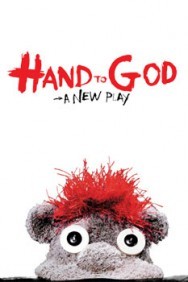 Tony Award nominated and runaway Broadway smash-hit comedy Hand to God is to transfer to London’s West End in February 2016.

Robert Askins’ darkly funny new play is scheduled to open at the Vaudeville Theatre on 5 February 2016, after closing on Broadway at the start of January.

Hand to God received unanimous critical praise after opening in April this year at the Booth Theatre in New York City, going on to be nominated for five Tony Awards. The production started life Off-Broadway at the Ensemble Studio Theatre back in October 2011, then transferring to the Lucille Lortel Theatre in March 2014.

Hand to God tells the hilarious and heart-breaking story of a reclusive teenager named Jason and his sock puppet Tyrone. This sock friend takes on a life of its own and displays an irreverent and foul-mouthed disposition, with uproarious consequences.

Kevin McCollum, the American producer of the acclaimed play said in a statement, ‘Having played an extraordinary nine month run on Broadway, London is the natural next step for a new American play that is this exciting. We are thrilled that Hand to God will soon be experienced by audiences all over the world’.

Director Moritz von Stuelpnagel will return to lead the London production of Hand to God, but casting is yet to be announced.

Tickets for Hand to God are due to go on sale at the end of October 2015.