by Best of Theatre Staff on Friday 6 July 2018, 10:48 am in Cast Changes and Announcements 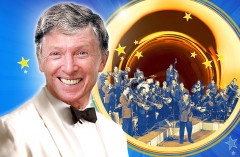 Joining the legendary performer Tommy Steele on stage at the London Coliseum in The Glenn Miller Story this summer is Marti Webb, which will be running for a limited season from 6 July – 18 August.

60 years after making his stage debut at the London Coliseum in 1958 starring in Rogers and Hammerstein’s Cinderella, the celebrated singer and actor Tommy Steele – Britain’s first Rock and Roll star – returns to this prestigious London stage to celebrate his idol Glenn Miller in a new musical production.

Glenn Miller was the best selling recording artist in the world from 1939 to 1943, leading one of the best known big bands. In those four years, he scored 23 number-one hits – more than Elvis Presley and The Beatles.

The Glenn Miller Story features the journey the legendary big band leader took to find his unique sound, and his subsequent fame and untimely death. With the authentic sounds of In the Mood, Moonlight Serenade, Little Brown Jug, Pennsylvania 6-5000, Tuxedo Junction, Chattanooga Choo Choo, and many more era-defining favourites. It is produced by Bill Kenwright with choreography by Olivier Award Winner Bill Deamer and direction by Bob Tomson and Bill Kenwright.