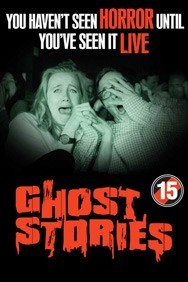 Back in 2010, the Lyric Hammersmith took a punt on Jeremy Dyson and Andy Nyman’s Ghost Stories. The production was so successful that it went on to transfer to the Duke of York’s theatre in the West End. Now the genuinely chilling show is back and, like any good horror movie villain, it’s stronger and more terrifying than ever before.

Shows that make audiences jump out of their skin in fright have always been a winner in London’s theatreland. The long-running production of The Woman in Black is testament to that, seeing audiences return again and again to the Fortune Theatre to be scared out of their wits by the spooky tale. And last year’s Afraid of the Dark at the Charing Cross Theatre served up another ‘fright fest’ to hungry punters. However, both of these pale in comparison to the terror of Ghost Stories, and its new home at the Arts Theatre only adds to the claustrophobic atmosphere and shock factor.

Now the genuinely chilling show is back and, like any good horror movie villain, it’s stronger and more terrifying than ever before

Audiences are sworn to secrecy about the twists and turns of Ghost Stories, so suffice it to say that the show revolves around a genial parapsychologist as he gives a lecture to the awaiting crowd on the myths surrounding so-called encounters with ghosts. This talk deals with three such experiences that have mystified even him, and it is these cases that we see played out on stage.

The first focuses on a lonesome night watchman counting down the hours of his long shift in a dark and wet warehouse; The second on a hellish car journey through a wood in the pitch-black. The third sees an arrogant Etonian besieged by a malevolent force in the nursery of his unborn son. But as the evening comes to a close, it is clear that the man giving the lecture has something to hide and the final terrifying twist sheds light on all that has gone before.

Paul Kemp as the parapsychologist-cum-narrator leads the strong cast from the front, slowly revealing more untoward aspects of the character, keeping the audience guessing right until the end. Gary Shelford as the expectant dad brings an arrogant charm and Philip Whitchurch proves disturbing believable as the lonely night watchman.

Directed by the show’s creators Jeremy Dyson and Andy Nyman along with West End regular Sean Holmes, Ghost Stories has been tightly tuned into a thrilling 80 minutes of gripping storytelling with little space for the audience to catch their breath between the blood-chilling revelations. The grizzly practical effects by Scott Penrose and set design by Jon Bausor are some of the most inventive ever created, springing traps for the unsuspecting audience and shredding nerves left right and centre.

The eerie retellings of these stories are laced with comic moments and playful send-ups of the now iconic Twilight Zone and Hammer Horror films. The writers haven’t just opted for the easy scares either. There is a palpable sense of quiet despair and creeping menace that pervades the entire production, meaning that the terror stays with you long after departing the auditorium.

Dyson and Nyman’s use of intricate detail in the stories gives them the believability that is so often missed in many mainstream horrors and Holmes hasn’t missed a trick in the staging of them, ratcheting up the tension until your fingernails are digging into the arm of your seat. There is also brilliant work from sound designer Nick Manning. He creates some of the show’s biggest scares: even at one point managing to make the packed auditorium jump simultaneously – quite some feat!

Be advised: Ghost Stories is not for the faint of heart, as the night vision cameras trained on the audience can vouch for. But if you are looking for an entertaining night out akin to a theme park ride mixed in with some wonderful performances, then this one’s for you. Just remember to bring earplugs for the screaming girls that are sure to be sitting right behind you!