Georgia May Foote to Play Holly Golightly from September 2016

by Best of Theatre Staff on Wednesday 16 March 2016, 10:21 am in Cast Changes and Announcements 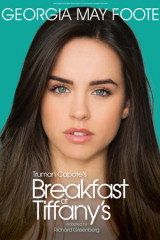 Georgia May Foote will play the role of Holly Golightly in the UK Tour of Breakfast at Tiffany’s from 19 September to 19 November 2016. Georgia will be sharing the role with Pixie Lott and Emily Atack, whose dates have been announced previously.

Georgia was runner-up in last year’s Strictly Come Dancing. Her television credits include Katy Armstrong in Coronation Street, Gemma in This Is England ’86 and Alison Simmons in Grange Hill. Breakfast at Tiffany’s is her professional stage debut.

Georgia said “I am so excited that for my first theatre role I will be playing such an iconic character. I cannot wait to join the cast of Breakfast at Tiffany’s as Holly Golightly. It’s a wonderful adaptation of an incredible story and I'm really thrilled to be part of it!”

Director of Breakfast at Tiffany’s, Nikolai Foster, said of the casting of Georgia May Foote, "Completing our perfect trio of leading ladies taking on the role of Holly Golightly, we are all thrilled Georgia is joining the Breakfast at Tiffany's team. It's hugely inspiring for all of us to be working with actors who are perfectly suited to the role and will help encourage new generations of theatregoers to share Capote's beautiful story."

Breakfast at Tiffany’s began its run of sold-out performances at Curve, Leicester on 3 March, before embarking on a UK & Ireland Tour on 15 March. There will be a 12-week season at the Theatre Royal Haymarket in London’s West End from 30 June to 17 September 2016.

Breakfast at Tiffany’s in London