by Best of Theatre Staff on Friday 1 September 2017, 9:31 am in Cast Changes and Announcements 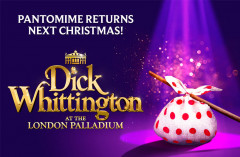 Dick Whittington will run at the London Palladium for five weeks only over the festive season from Saturday 9 December 2017 to Sunday 14 January 2018, with press night on Wednesday 13 December 2017 at 7pm.

Emma Williams completes an award-winning run as Helen Walsingham in Half A Sixpence at the Noël Coward Theatre tomorrow having also played the role at Chichester Festival Theatre alongside Charlie Stemp. She returns to the Palladium where she made her West End debut as Truly Scrumptious in the original cast of Chitty Chitty Bang Bang. Her other theatre credits include Mrs Henderson Presents at the Noël Coward Theatre, Zorro at Garrick Theatre and Love Story for Chichester Festival Theatre as well as in the West End. Her television credits include Silent Witness, Casualty, Bleak House, Doctors, Marple: The Body in the Library, Heartbeat and Where the Heart Is.

Lukus Alexander’s recent theatre credits include the UK Tour of The Who’s Tommy, Dick McWhittington at the SECC, Glasgow, Dick Whittington at the Theatre Royal, Plymouth, Guys and Dolls at Cambridge Arts Theatre and Doctor Atomic at the London Coliseum.

As the world’s biggest pantomime producer, over the past 35 years Qdos Entertainment has established itself as one of the largest entertainment companies in Europe. Over the past three decades the pantomime giant has staged 684 pantomimes and this season expects over two million people will see one of its shows this season.