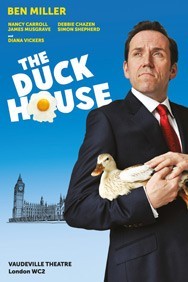 Leading man Ben Miller is best known for his work in the television show Death in Paradise and The Armstrong and Miller Show. Miller was also part of the original cast of The Ladykillers in the West End. The play also stars Olivier Award-winning actress Nancy Carroll and X Factor star Diana Vickers.

The play is written by Dan Patterson and Colin Swash, both are no strangers to political comedy. Patterson created Whose Line Is It Anyway? and has produced the popular BBC panel show Mock The Week, while Swash has written jokes for more than 40 series of Have I Got News For You and is a regular contributor for Private Eye magazine. ‘Between the two of us we have written topical jokes for TV for over 50 years, but there aren't usually enough on one subject to make a play,’ they said. ‘MPs' expenses were - as the MPs also found - the gift that keeps on giving.’