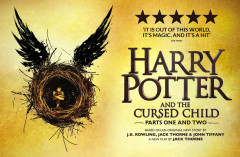 Sonia Friedman, Colin Callender and Harry Potter Theatrical Productions, producers of Harry Potter and the Cursed Child, announce today that a further 60,000 tickets will be released for sale on Tuesday, 22 November 2016, at 11am GMT, for performances from 13 December 2017 – 4 February 2018. This will be followed by regular ticket releases throughout the next year.

Harry Potter and the Cursed Child, the eighth story in the Harry Potter series and the first official Harry Potter story to be presented on stage, began previews in June 2016 in London’s West End at the Palace Theatre.

Based on an original new story by J.K. Rowling, Jack Thorne and John Tiffany, Harry Potter and the Cursed Child is a new play by Jack Thorne, directed by John Tiffany with movement by Steven Hoggett, set by Christine Jones, costumes by Katrina Lindsay, music & arrangements by Imogen Heap, lighting by Neil Austin, sound by Gareth Fry, illusions & magic by Jamie Harrison, music supervision & arrangements by Martin Lowe and casting by Julia Horan.