Constellations to wow the West End for a second time 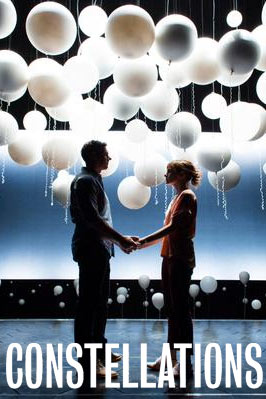 Constellations, the critically acclaimed play by Nick Payne is due to arrive at the Trafalgar Studios on the 9 July 2015. The Royal Court production, which is currently touring the UK, will play a very limited run through to 1 August 2015.

Directed by Michael Longhurst, Constellations tells the story of a young man and woman who meet and fall in love, but this story is then seen through many different parallel universes or possible destinies that the couple’s journey could have taken. The play deals with the fight between choice and destiny, always asking ‘what if’?

The play premiered at the Royal Court Theatre in January 2012, with Sally Hawkins and Rafe Spall in the lead roles. After unanimous acclaim, the production transferred to the Duke of York’s Theatre in November 2012 and picked up the Evening Standard Theatre Award for Best New Play. The current production stars Joe Armstrong and Louise Brealey.

Catch Constellations at the Trafalgar Studios from 9 July to the 1 August 2015.