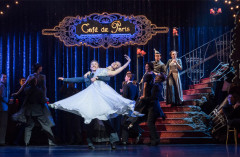 “CINDERELLA” is currently touring the UK with just six weeks remaining of the 28-week tour.Next week, “CINDERELLA” will be in Sheffield before travelling to Canterbury, Edinburgh and Glasgow, finishing in Woking on 23 June 2018. Full details below.

In addition, fans around the country will have the opportunity to watch “CINDERELLA” on a big screen near them as the production will be screened at cinemas nationwide on Tuesday 15 May followed by a live Q&A, via satellite with Matthew Bourne.

Matthew Bourne said today:“New Adventures is committed to taking our work to as wide an audience as possible. That not only includes our annual nationwide tour to many of the UK’s major venues but also internationally where the company has built up a popular fanbase. It’s also important to reach audiences who perhaps cannot get to a live performance. So our big-screen presentation of “CINDERELLA”, this Tuesday, to over 200 UK cinemas, many in rural areas and towns that do not have a local theatre big enough to house our live show, is particularly exciting”.

Following their triumph playing Victoria Page in “The Red Shoes”, the role of ‘Cinderella’is performed by Cordelia Braithwaite and Ashley Shaw. Cinderella’sheroic Pilot, ‘Harry’, is performed by Andrew Monaghan and Edwin Ray. ‘The Angel’, Cinderella’s fairy godfather is danced by Paris Fitzpatrick and Liam Mower.

One of New Adventures’ most loved productions Matthew Bourne’s “CINDERELLA”is a thrilling and evocative love story, set in London during the Second World War.

Matthew Bourne’s interpretation of the classic fairy tale has, at its heart, a true war-time romance. A chance meeting results in a magical night for Cinderella and her dashing young RAF pilot, together just long enough to fall in love before being parted by the horrors of the Blitz.

With Lez Brotherston’s sumptuous costumes and sets, which won an Olivier Award for his original designs, and lighting by Olivier Award-winning Neil Austin, “CINDERELLA”will be performed in Surround Sound, designed by Paul Groothuis and featuring a specially commissioned recording played by a 60-piece orchestra. Matthew Bourne’s vivid story telling has never been more heart-stopping and touching, and will take the audience into the heart of Prokofiev’s magnificent score, and the sights and sounds of war-torn London.