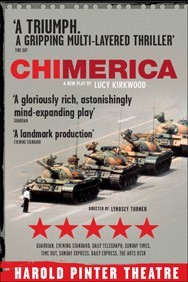 After premiering earlier this year at the Almeida Theatre in north London, Chimerica transferred to the West End for a strictly limited run, opening on the 15 August. Playing at the Harold Pinter Theatre for 12 weeks (until 19 October), Chimerica has been acclaimed by critics and audiences alike.

From the pen of writer Lucy Kirkwood, Chimerica tells the story of Joe, a young American photojournalist who captures a piece of history as the tanks toll through Tiananmen Square in 1989. When a cryptic message is left in a Beijing newspaper 20 years later, Joe is driven to discover the truth behind his legendary photograph.