by Best of Theatre Staff on Friday 25 November 2016, 10:09 am in Cast Changes and Announcements 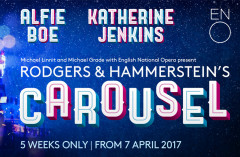 Alfie Boe and Katherine Jenkins will star for the first time together in the West End as Billy Bigelow and Julie Jordan in Rodgers and Hammerstein’s Carousel, the third production in the partnership between English National Opera (ENO) and the GradeLinnit Company.

Lonny Price will direct the strictly limited run of 41 performances at ENO’s London Coliseum. Beginning on 7 April 2017, with press night on 11 April 2017 at 7pm, the final performance in this strictly limited five week run takes place on 13 May 2017. ENO award-winning 40-piece orchestra and chorus will accompany the cast in this semi-staged production. Further casting will be announced shortly.

Fifteen years after getting caught up in an armed robbery and taking his own life, the charming carousel barker Billy Bigelow gets a chance to return to earth and make amends. Discovering that his daughter Louise has grown into a lonely, troubled teenager, haunted by her father’s legacy, Billy vows to restore pride to his family.

Platinum-selling recording artist, English tenor and actor Alfie Boe returns to the West End to play Billy Bigelow. He played Jean Valjean in the West End production of Les Miserable at the Queen's Theatre, a role he also played in the show’s 25th Anniversary Concert and on Broadway. He made his US debut in Baz Luhrmann’s La Bohème, where earlier this year he played J.M. Barrie in Finding Neverland. After studying at the National Opera Studio and the Royal Opera House he went on to release numerous highly-successful solo albums in the UK and the US. His live opera credits include The Pearl Fishers at ENO and Romeo et Juliette at the Royal Opera House. Currently on a 28 date sold out UK tour with Michael Ball, their new album Together, which entered the charts at number 2 on release this month, looks set to be one of the biggest selling records of 2016. The related Ball and Boe: One Night Only, ITV special, will be broadcast on 9 December 2016.

Welsh lyric mezzo soprano, singer and songwriter Katherine Jenkins will make her West End Theatre debut as Julie Jordan. Jenkins represented Wales three times in the Choirgirl of the Year competitions and was a member of the Royal School of Church Music Cathedral Singers and the National Youth Choir of Wales. She won a scholarship to study at the Royal Academy of Music and has since gone on to record ten studio albums with Second Nature and Living a Dream receiving Classic Brit Awards Album of the Year. Her most recent album Home Sweet Home was her seventh studio album to reach number 1. She has performed for the Pope, Presidents and Royalty including The Queen’s 90th birthday celebrations earlier this year. Jenkins has appeared extensively on television both in the UK and the US including the series Popstar to Operastar and Dancing With the Stars. Multi award-wining Jenkins was a 2016 Invictus Games Ambassador and was made an OBE in 2014.

Lonny Price directed Glenn Close in Andrew Lloyd Webber’s Sunset Boulevard and Emma Thompson and Bryn Terfel in Stephen Sondheim’s Sweeney Todd: The Demon Barber of Fleet Street, both at the London Coliseum, having previously staged the latter with the stars at Lincoln Center in New York. His Broadway production of Lady Day at Emerson’s Bar and Grill, for which Audra McDonald won her record-breaking 6th Tony Award, aired on HBO last spring. His other recent productions include Company (with Neil Patrick Harris, Stephen Colbert, Patti LuPone), Sondheim: The Birthday Concert (Emmy award-winning) and Candide (with Kristen Chenoweth). On Broadway, Price directed Audra McDonald in 110 in the Shade, Danny Glover in Athol Fugard’s ‘Master Harold’ ... and the Boys, Joan Rivers in Sally Marr and her Escorts (which he co-wrote with Rivers and Erin Sanders), Jenn Colella in Urban Cowboy and himself in A Class Act for which he also co-wrote the book (with Linda Kline) and was nominated for a Tony Award. His off-Broadway work includes Visiting Mr. Green with Eli Wallach, Beautiful Girls with Zoe Caldwell and Athol Fugard’s Valley Song. He made his opera directing debut at the Houston Grand Opera directing Audra McDonald in Poulenc’s La Voix humaine and Michael John LaChiusa’s Send. His first feature film, ‘Master Harold’ ... and the Boys (with Freddie Highmore and Ving Rhames) received the 2011 Best Drama Award at the New York International Film and Video Festival as well as his receiving a Best Director of a Drama Award. Price directed the television broadcasts of his Sweeney Todd: The Demon Barber of Fleet Street (Emmy award-winning), Company and Candide as well as Jonathan Kent’s West End production of Gypsy, starring Imelda Staunton.

Carousel is presented by Michael Linnit and Michael Grade with English National Opera who have previously presented the critically acclaimed runs of Sweeney Todd with Emma Thompson and Bryn Terfel and Sunset Boulevard with Glenn Close. The GradeLinnit Company are currently producing 42nd Street, to open in March 2017 at The Theatre Royal Drury Lane.