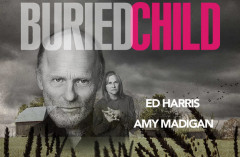 For the first time, the multi award-winning, international star Ed Harris (Pollock, The Hours, The Truman Show and the forthcoming HBO series from J.J. Abrams & Jonathan Nolan; Westworld) will appear on the West End stage, to reprise his role of Dodge in Sam Shepard’s Pulitzer & Obie prize winning play, Buried Child, following a critically acclaimed New York run earlier this year. Harris will be joined by fellow Golden Globe winner, Amy Madigan (Twice in a Lifetime, Roe vs. Wade), who will also reprise her role of Halie, with further casting to be announced in due course.

The New Group’s critically acclaimed Off-Broadway revival of Buried Child, directed by Scott Elliott, will transfer to Trafalgar Studios in London for a strictly limited season from 14 November – 18 February 2017, with press night on 24 November.

Buried Child launched the career of one of America’s greatest living playwrights, Sam Shepard. The play was awarded both a Pulitzer Prize and an Obie Award in 1979, and was subsequently nominated for five Tony Awards following its revival on Broadway in 1996. After working with film star Ed Harris in the film The Right Stuff in 1983, Shepard wrote the role of Eddie in his play Fool for Love for Harris’ stage debut. Following that partnership, Buried Child is now the fifth of Shepard’s plays that Harris has performed in, including Cowboy Mouth, True West and Simpatico. Oscar nominee Amy Madigan plays the wife of real life husband Harris on stage for the second time, following The Jacksonian in 2013. Madigan and Harris met on the set on 1984 film Places in the Heart, and have since featured in another ten films together, including Harris’ directorial debut Pollock in 2000, for which he was nominated for an Academy Award for Best Actor.

Dodge (Harris) and Halie (Madigan) are barely hanging on to their farmland and their sanity while looking after their two wayward grown sons. When their grandson Vince arrives with his girlfriend, no one seems to recognize him, and confusion abounds. As Vince tries to make sense of the chaos, the rest of the family dances around a deep, dark secret. This wildly poetic and cuttingly funny take on the American family drama gleefully pulls apart the threadbare deluded visions of our families and our homes.

Scott Elliott, Artistic Director, The New Group said “I'm so excited to return to the West End so quickly after our production of The Spoils with another New Group show and another representation of our ongoing relationship with ATG, and Lisa Matlin, to bring shows from New York to London and vice versa, featuring artists from both cities working together to create the kind of fierce ensemble work the New Group is known for. Buried Child is Sam’s masterpiece and I can’t wait to get another crack at it with Shepard’s masters, Ed Harris and Amy Madigan, along with some fresh British artists. Ed and Amy are members of the New Group family and I am particularly thrilled to introduce these brilliant stage creatures to West End audiences.”

Ed Harris made his directorial debut on the feature film Pollock, receiving an Academy Award nomination as Best Actor for his performance in the title role. His co-star, Marcia Gay Harden, won a Best Supporting Actress Oscar under his direction. Harris directed, starred in and co-wrote the screenplay for Appaloosa. He has been lauded for his performances in A History of Violence (Natl. Society of Film Critics Award), The Hours (Oscar, Golden Globe, SAG and BAFTA nominations), The Truman Show (Oscar nomination, Golden Globe Award) and Apollo 13 (Oscar and Golden Globe nominations, SAG Award). Most recently, Harris completed filming on Dean Devlin’s thriller, Geostorm, James Franco’s film adaptation of Steinbeck’s In Dubious Battle, and starred opposite Franco in The Adderall Diaries. Some of his many film credits include Run All Night, Bong Joon Ho’s Snowpiercer, Frontera, The Face of Love, Gone Baby Gone, The Way Back, Copying Beethoven, The Right Stuff, The Abyss, The Rock, The Human Stain, A Beautiful Mind, Stepmom, A Flash of Green, Places in the Heart, Alamo Bay, Sweet Dreams, Jacknife, State of Grace, The Third Miracle and Touching Home. On television, Harris will star in J.J. Abrams’ and Jonathan Nolan’s forthcoming Westworld for HBO. When last on HBO, Harris won a Golden Globe Award for Best Supporting Actor, along with Emmy and SAG nominations, for his portrayal of John McCain in the Jay Roach directed Game Change. He starred with Paul Newman in the HBO miniseries Empire Falls, for which he received Emmy, Golden Globe and SAG Best Actor nominations. Other television credits include The Last Innocent Man, Running Mates, Paris Trout and Riders of the Purple Sage, for which he and his wife Amy Madigan, as co-producers and co-stars, were presented with the Western Heritage Wrangler Award for “Outstanding Television Feature Film.” Harris starred in the world premiere of playwright Beth Henley’s The Jacksonian at LA’s Geffen Playhouse, and reprised his role the following year Off-Broadway for The New Group. Harris received an Outer Critics Circle Award nomination (“Outstanding Solo Performance”) and a Lucille Lortel Award nomination (“Outstanding Solo Show”) for Wrecks at The Public Theater. He originated the role, with writer/director Neil LaBute, for the play’s world premiere at the Everyman Palace Theatre in Cork, Ireland and won the 2010 LA Drama Critics Circle Award for “Best Solo Performance” for Wrecks at the Geffen Playhouse. His theatre credits include: Ronald Harwood’s Taking Sides, Sam Shepard’s Fool for Love (Obie), and Simpatico (Lucille Lortel Award “Outstanding Actor”), George Furth’s Precious Sons (Drama Desk Award), Prairie Avenue, Scar, A Streetcar Named Desire, The Grapes of Wrath, and Sweet Bird of Youth.

Amy Madigan, a critically acclaimed actress of film, television and stage, received an Academy Award nomination for Best Supporting Actress for her role in the feature film Twice In A Lifetime. She also starred as art patroness Peggy Guggenheim in Pollock. Additional feature film credits include Sweetwater, The Lifeguard, Gone Baby Gone, Winter Passing, Loved, Female Perversions, The Dark Half, Uncle Buck, Field of Dreams, Nowhere to Hide, Streets Of Fire, Love Letters and Alamo Bay. Most recently, Madigan starred in Frontera. She stars next in the independent film STUCK. On television, Madigan most recently starred in Neil LaBute’s Ten x Ten for DirecTV. She had recurring roles in J.J. Abrams’ Fringe and ABC’s Grey’s Anatomy as Seattle Grace’s resident psychiatrist. In addition to starring on the HBO series Carnivàle, Madigan received a Golden Globe Award and an Emmy nomination for her performance in the telefilm Roe vs. Wade. She also starred in Lifetime’s television film Living Proof. Additional television film credits include Lifetime’s And Then There Was One, Shot in the Heart, HBO’s The Laramie Project, Riders of the Purple Sage, Robert Altman’s The Laundromat, Victims, In The Name of the People, Having Our Say, A Bright Shining Lie, Lucky Day, The Revolt of Mother and The Day After. On stage, Madigan starred in the critically-acclaimed productions of Beth Henley’s The Jacksonian at The New Group (NY) and the Geffen Playhouse (LA). Other theater credits include Broadway’s A Streetcar Name Desire, Mark Taper Forum’s A Lie of the Mind, Manhattan Theatre Club’s The Lucky Spot, Los Angeles Theatre Center’s Stevie Wants To Play The Blues, LA’s Prairie Avenue and Strasberg Theatre’s production of In The Boom Boom Room. Most recently, Madigan directed the West Coast premiere of Off the King’s Road at the Odyssey Theatre in Los Angeles.

Sam Shepard had his first New York plays, Cowboys and The Rock Garden, produced by Theatre Genesis in 1963. For several seasons, he worked with Off-Broadway theater groups including La MaMa and Caffe Cino. Eleven of his plays have won Obie Awards including Chicago and Icarus’s Mother (1965), Red Cross and La Turista (1966), Forensic and the Navigators and Melodrama Play (1967), The Tooth of Crime (1972), Action (1974), and Curse of the Starving Class (1976). Shepard was awarded a Pulitzer Prize as well as an Obie Award for his play Buried Child (1979). Fool for Love (1982) received the Obie for Best Play as well as for Direction. A Lie of the Mind (1985) won the New York Drama Critics’ Circle Award in 1986 and the 1986 Outer Critics Circle Award for Outstanding New Play. A revived Buried Child under the direction of Gary Sinise opened on Broadway in April 1996 and was nominated for a Tony Award. Kicking a Dead Horse (2007) and Ages of the Moon (2009) both received their world premieres at the Abbey Theatre in Dublin. Kicking a Dead Horse transferred to The Public Theater in New York and to the Almeida Theatre in London, and Ages of the Moon received its US premiere at Atlantic Theater Company in 2010. Heartless received its world premiere at Signature Theatre in New York in 2012. Shepard’s latest play, A Particle of Dread (Oedipus Variations), was produced by Field Day Theatre Company in Derry, Ireland in 2013 and had its US premiere at Signature Theatre in 2014. Shepard wrote the screenplays for Zabriskie Point, Wim Wenders’ Paris, Texas and Robert Altman’s Fool for Love, a film version of his play of the same title. As writer/director, he filmed Far North and Silent Tongue in 1988 and 1992 respectively. As an actor he has appeared in the films Days of Heaven, Resurrection, Raggedy Man, The Right Stuff, Frances, Country, Fool for Love, Crimes of the Heart, Baby Boom, Steel Magnolias, Bright Angel, Defenseless, Voyager, Thunderheart, The Pelican Brief, Safe Passage, Hamlet and Don’t Come Knocking, also co-written with Wim Wenders. He can currently be seen in the Netflix Original Series Bloodline in which he stars opposite Sissy Spacek. In 1986, Shepard was inducted into the American Academy of Arts and Letters. In 1992, he received the Gold Medal for Drama from the Academy, and in 1994, he was inducted into the Theater Hall of Fame.