by Best of Theatre Staff on Friday 23 July 2021, 3:01 pm in Cast Changes and Announcements 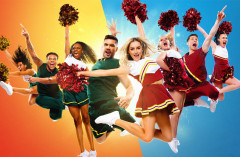 Selladoor Worldwide is delighted to cheer on the full cast of BRING IT ON THE MUSICAL, who will be joining musical theatre and TV star Amber Davies as ‘Campbell’ and four-time Olympic medallist Louis Smith as ‘Cameron’. The show opens at Southbank Centre Queen Elizabeth Hall, London on Wednesday 8 December 2021, following performances at Peterborough New Theatre and ahead of a UK tour in 2022.

BRING IT ON THE MUSICAL is thrilled to also welcome Connor Carson (he/him) (Blitz! at the Union Theatre) as ‘Randall’ and following consultations with members of the transgender theatre community, the show is delighted to announce star of Australian X Factor 2014, runner up of Australia’s Got Talent 2009 and cast member of the most recent Asian tour of Cats, Jal Joshua (he/she/they) as ‘La Cienega’.

Inspired by the 2000 film of the same name, BRING IT ON THE MUSICAL features an original score by the multi award winning creator of Hamilton, Lin-Manuel Miranda and Pulitzer Prize winning Tom Kitt, composer of Next To Normal. The book is written by the Tony Award winning writer of Avenue Q, Jeff Whitty and the lyrics are by both Lin-Manuel Miranda and writer of the stage adaptation of High Fidelity, Amanda Green.