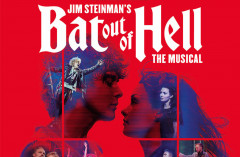 Jim Steinman’s Bat Out Of Hell – The Musical will be extending into 2019, with a new booking period at the Dominion Theatre from 27 October 2018 to 5 January 2019 going on sale at 12.00noon today, Thursday 26 July 2918. The winner of the Evening Standard Radio 2 Audience Award for Best Musical 2017 began previews at the Dominion Theatre on Monday 2 April, with a gala performance on 19 April 2018.

Bat Out Of Hell – The Musical wowed critics and public alike when it played limited seasons at Manchester Opera House, London Coliseum and Toronto’s Ed Mirvish Theatre in 2017, and has been seen by over 650,000 people to date. A new production opens in Toronto for a three-week engagement this autumn as the first stop in a multi-city North American tour.

In April 2018, Bat Out Of Hell – The Musical announced a wide-ranging global partnership to support the Invictus Games Foundation, the governing body of the Invictus Games, a global sporting event for wounded, injured and sick servicemen and women, both serving and veterans.