by Oliver Mitford on Tuesday 30 September 2014, 10:52 am in Cast Changes and Announcements 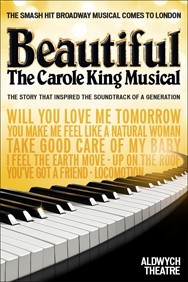 Beautiful: The Carole King Musical received unanimous praise when it opened on Broadway this year, and now the hit musical comes to the West End’s Aldwych Theatre in February 2015.

American leading lady Jessie Mueller originated the role on Broadway and has been hailed as the next musical theatre superstar. So British actress Katie Brayben has quite the pair of shoes to fill!

Brayben is currently playing the role of Princess Diana in the Almeida Theatre’s transfer of King Charles III at Wyndham's Theatre and has previously starred alongside Matt Smith in American Psycho the musical.

Beautiful is based on the life and work of singer songwriter Carole King and charts her journey from small town beginnings to global mega-star. King’s path to stardom was not an easy one and the musical explores her rocky relationship with husband and songwriting partner Gerry Goffin, and looks at her friendship with Cynthia Weil and Barry Mann. The musical includes some of King’s greatest and best-loved hits including, I Feel the Earth Move, Up on the Roof, Take Good Care of my Baby, (You Make Me Feel Like) A Natural Woman, One Fine Day, It’s Too Late, You’ve Got A Friend and Will You Love Me Tomorrow.

Katie Brayben is no stranger to the West End stage, having appeared as Sophie in Mamma Mia! and now as Princess Di in King Charles III. Her other theatre credits include Ragtime and A Midsummer Night's Dream both at the Regent’s Park Open Air Theatre. Brayben will be joined on stage by Glynis Barber who will play Carole King’s mother, and Alan Morrisey who takes on the part of King’s husband Gerry Goffin. Further casting will be announced in the coming months.

Beautiful: The Carole King Musical opens at the Aldwych Theatre on 10 February next year.