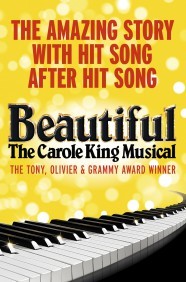 Today, 24 February 2016, the producers of the Olivier, Tony and Grammy award-winning Beautiful - The Carole King Musical announce the show will be extending booking in the West End to 18 February 2017.

Last night (23 February 2016) at the Aldwych Theatre the Olivier, Tony and Grammy award-winning Beautiful - The Carole King Musical celebrated its first birthday in the West End.

Celebrations included marking the February birthdays of Carole King, Barry Mann and the late Gerry Goffin, as well as the 45th anniversary of when King’s Grammy- award winning album Tapestry was released.

Carole King said: “I had the great pleasure of seeing the West End production of Beautiful on opening night in 2015 with my dear friends Barry Mann and Cynthia Weil. We were all so moved that we joined the company onstage after the show in singing You’ve Got a Friend and of course we couldn’t help but think of Gerry Goffin, who passed away in 2014. I know that Gerry would join Barry, Cynthia, and me in expressing gratitude not only to the company but to audience members, many of whom are coming to see the show not just once but twice or thrice. London is one of my favourite cities. I hope to be back very soon. Until then, here’s to another brilliant year. Cheers!”

Yesterday Beautiful - The Carole King Musical was announced as one of the West End productions eligible to receive this year’s Olivier Magic Radio Audience Award voted for by the public. Voting is now open at www.olivierawards.com On Monday 14 March four shortlisted nominees will be announced with the winning show being revealed on the night of the ceremony on Sunday 3 April 2016.

The West End cast is led by Cassidy Janson in the lead role alongside Alan Morrissey who plays King’s husband and song-writing partner Gerry Goffin with Lorna Want as song-writer Cynthia Weil, a role for which she won the 2015 Olivier for Best Actress in a Supporting Role in a Musical, Ian McIntosh as song-writer Barry Mann, Gary Trainor as music publisher and producer Don Kirshner and Diane Keen as Genie Klein, King’s mother.