Cast announced for Bat Out of Hell at Dominion

by Best of Theatre Staff on Tuesday 6 February 2018, 11:16 am in Cast Changes and Announcements 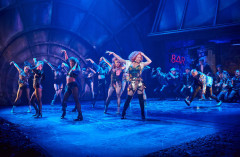 With the show’s stellar leads, Andrew Polec and Christina Bennington, previously announced, the full company has now been cast for the 2018 West End run of Jim Steinman’s – Bat Out Of Hell The Musical, winner of the Evening Standard Radio 2 Audience Award for Best Musical 2017. Performances will begin at the Dominion Theatre in London on 2 April, with a Gala Night on Thursday 19 April.

Bat Out Of Hell – The Musical wowed critics and public alike when it played limited seasons at Manchester Opera House, London Coliseum and Toronto’s Ed Mirvish Theatre in 2017, and has been seen by nearly 500,000 people so far. The show has received the most nominations for a musical in the 2018 WhatsOnStage Awards, with eight nominations.

Bat Out Of Hell