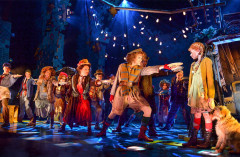 Michael Harrison and David Ian are delighted to announce that their smash hit production of the musical “ANNIE” will embark on a UK tour opening at the Manchester Opera House on Saturday 9 February 2019. This production recently ran for an extended season in the West End following a sell out tour of the UK and Ireland in 2015/16 and will open later this month in Toronto.

Tour schedule and on sale details below with further dates and casting to be announced soon.

“ANNIE” has Music by Charles Strouse, Lyrics by Martin Charnin and a Book by Thomas Meehan.

“ANNIE” is directed by Nikolai Foster with set and costume design by Colin Richmond, choreography by Nick Winston, lighting by Ben Cracknell and sound design by Richard Brooker.

“ANNIE” is produced by Michael Harrison and David Ian.