by Oliver Mitford on Tuesday 28 October 2014, 12:20 pm in Cast Changes and Announcements 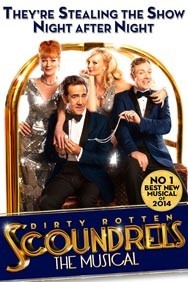 It has been announced that West End leading man Alex Gaumond will replace Rufus Hound as top conman, Freddy Benson from 11 November 2014. Gaumond joins the current cast of Robert Lindsay, Gary Wilmot, Bonnie Langford and Katharine Kingsley on stage at the Savoy Theatre.

Dirty Rotten Scoundrels has been running since February 2014 and has been enjoyed by over 200,000 people so far. The musical is based on the blockbusting 1988 film of the same name that stared Steve Martin and Michael Caine. This West End production is the UK premiere, having been reimagined and restaged from the hugely successful Broadway version.

The new trickster on the block, Alex Gaumond has most recently enjoyed massive critical acclaim playing Ms Trunchbull in Matilda the musical at the Cambridge Theatre. Prior to this, he starred in Top Hat at the Aldwych Theatre playing Alberto Beddini, the lead role of Galileo in We Will Rock You at the Dominion Theatre, and the part of Emmett Forrest in Legally Blonde, for which he was nominated for an Oliver Award. His other West End stage credits include Guys and Dolls, Sunday In The Park With George, Scrooge, and The Full Monty.

Dirty Rotten Scoundrels is directed and choreographed by Tony Award-winning Jerry Mitchell, the man behind Legally Blonde and current Broadway smash-hit Kinky Boots. The show’s music is written by David Yazbek and is written by the Emmy-Award winning Jeffrey Lane.

Dirty Rotten Scoundrels is currently booking at the Savoy Theatre until 7 March 2015.