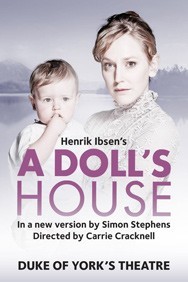 The Young Vic’s transfer of A Doll’s House shines bright at the Duke of York’s Theatre.

After its acclaimed opening run at the Young Vic last year, Henrik Ibsen’s seminal play A Doll’s House then went on to enjoy anther sold-out run in 2013. So it seems the perfect choice for a West End transfer and the production certainly lives up to the hype. Expectations were sky-high, seeing as leading actress Hattie Morahan had won both the Evening Standard and Critics’ Circle awards for her portrayal of conflicted mother Nora Helmer. Not only does Morahan excel, but also the whole production matches this exceptional central performance.

The play focuses on Nora Helmer, a woman who, on the surface, seems happy in her role as mother, wife and social butterfly. However, something is simmering underneath all the elegance and tranquility of their family home. Nora’s husband Torvald (Dominic Rowan), a successful banker, loves his wife dearly, but cannot see the extent to which he suffocates her. One winter evening, a man from Nora’s past arrives at the house unannounced and proceeds to blackmail Nora. The pressure of keeping a secret and the guilt consumes Nora until she is forced to make a drastic and life-changing decision…

There are no famous names in this production, just pure talent delivering world-class performances. Let’s hope this is the start of a new trend…

Renowned playwright Simon Stephens – who has recently seen huge success with his stage adaptation of the Curious Incident of the Dog in the Night Time – has moved away from his anarchic roots to adapt a simple and elegant version of Ibsen’s masterpiece. The dialogue has been stripped of its exposition and occasional metaphorical tangents, leaving us with a clear story that never once felt sluggish or stale. This paring back of the text also leaves way for the actors to play with the subtext, as was so beautifully exhibited by Morahan on the numerous occasions where she must lie through her teeth and hide the truth from her husband. It is rare that a playwright trusts that the story can be told just as well by the actors’ skills as well as with the words he writes.

The action of the play takes place entirely in the Helmer’s family home. Consequently, set designer Ian MacNeil has cleverly constructed a cut-away house that revolves to reveal all the rooms of the home. As the stage spins, we are treated to fleeting images of the characters as they go about their daily lives. Director Carrie Cracknell has utilised these images to help tell the story and slowly expose the plot. The spinning set also helps to keep production incredibly fluid, moving from one scene to the next with effortless grace.

The house is suitably cramped and claustrophobic, only heightening Nora’s feeling of entrapment. As the play progresses and Nora’s paranoia increases, the house seems to grow darker and lighting designer Guy Hoare throws angular shadows across the stage creating a real sense of the impending tragedy to come.

With a play like A Doll’s House, the success of the production all depends on the ability of the lead actor or actress. The character of Nora is comparable to Hamlet. She never leaves the stage and all scenes focus on her. Hattie Morahan rises to this challenge. She has managed to do what many actors have not; she makes us feel for a character that is essentially flawed. We are on her side and this is not an easy task, considering her arrogant and materialistic personality. Morahan’s confidence and psychologically complex performance has the audience in the palm of her hand. She brings us to tears as easily as he does laughter. It is a master-class in detailed and considered acting.

Morahan’s confidence and psychologically complex performance has the audience in the palm of her hand. It is a master-class in detailed and considered acting.

The rest of the cast have quite a job on their hands in order to keep up with Morahan, but, thankfully, they all manage to hold their own. Dominic Rowan’s makes Torvald suitably wimpy, while Nick Fletcher’s Krogstad sends shivers of revulsion up the backs of the audience as he worms and manipulates his way into Nora’s life. Steve Toussaint strikes a fine balance between potential lover and suffering invalid in his portrayal of Doctor Rank.

The cherry on top of this magnificent production of A Doll’s House comes from composer Stuart Earl. His impacting classical score seems to drive the action ever forward. The music builds in intensity to match the level of the story and cleverly mimics the spinning set, as the cyclic phrases of music spin around again and again.

It is ever so refreshing to see a show in London’s West End that relies solely on the ability of the actors rather than ‘star’ billing. There are no famous names in this production, just pure talent delivering world-class performances. Let’s hope this is the start of a new trend…

A Doll’s House runs at the Duke of York’s Theatre until October 26.