Ultimate Beatles show Let It Be is back in the West End for a limited summer run. Packed with over 40 of the Fab Four's greatest hits, it's your chance to re-experience The Beatles' meteoric rise from humble beginnings in Liverpool's Cavern Club to their later period of studio mastery. Expect exhilarating live performances of early tracks including Twist and Shout and Drive My Car, as well as global mega-hits Yesterday, Hey Jude and Let It Be.

Top price tickets for Let It Be are £65 at face value, but they’re just £35 in our exclusive flash sale - that’s up to 46% off when you book your tickets by Sunday. 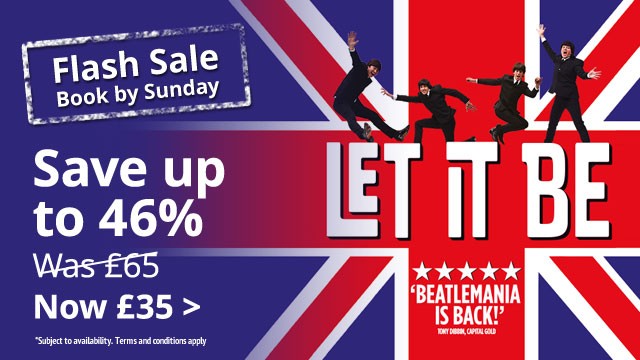 Subject to availability. Prices reflect the purchase price with the booking fee already included. Early booking is recommended. For hotel and restaurant package terms and conditions, please click through to the website.