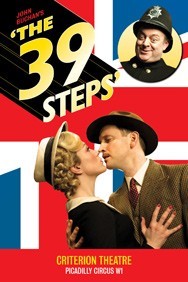 The 39 Steps strikes the perfect balance between utter farce and intelligent wit at the Criterion Theatre.

Since director Richard Baron staged The 39 Steps at Perth Theatre in 1998, the production has been on a journey as long and involved as that of the story’s protagonist, Richard Hannay, when he stumbles across an international spy conspiracy in John Buchan’s thriller.

The story of The 39 Steps starts back when Baron used Simon Corbie and Nobby Dimon’s adaptation of John Buchan’s 1915 novel of The Thirty-Nine Steps to create a small-scale production that toured to village halls. Baron had the insight to mix the styling of Alfred Hitchcock’s 1935 film version with the current stage adaptation to create a spoof of the thrilling tale, filled with gags and farcical comedy, all coming from the absurdity of staging the epic journey across Britain with only four actors, a few props and the audiences imagination.

Then, in 2005, Patrick Barlow rewrote the script, keeping the scenes, staging and small-scale feel and, in June of that year, the re-adaptation premiered at the West Yorkshire Playhouse. The play then opened in London's Tricycle Theatre and, after a successful run, transferred to the Criterion Theatre in Piccadilly, where it continues to delight packed audiences night after night.

However, producers of the show had bigger plans and, on 15 January 2008, the show made its Broadway premiere at the American Airlines Theatre in New York City. The production went on to move theatres three times before eventually closing on 15 April 2010. The Broadway production received six Tony Award nominations, winning two for Best Lighting Design and Best Sound Design and also won the Drama Desk Award for Unique Theatrical Experience. The original London version was also recognised at the 2007 Olivier Awards.

Essentially, The 39 Steps is a send-up of traditional melodrama and a parody of the 1930s’ British thriller genre, complete with starched white collars, pencil moustaches, secret agents and a very pretty leading lady.

The adventurous tale follows the square-jawed and stereotypically British hero named Richard Hannay (Ben Righton). Hannay opens the show by filling us in on the previous events from his London flat. We learn that he has got himself mixed up in a dastardly spy conspiracy in which he has been framed for a murder he did not commit and is therefore currently on the run from the law.

We then follow this dashing hero as he attempts to clear his name, traversing the length and breadth of the country, foiling a German spy, falling in love, escaping a faceless assassin and generally getting in and out of impossible situations.

The genius of the stage adaptation is that we are really watching two stories at once. The first being John Buchan's original ‘ripping yarn’ that still manages to keep the audience on the edges of their seats with every manic plot twist and red herring, even with the irreverent treatment. The second story is of the four actors intently trying their best to tell the tale against all the theatrical odds imaginable. These four fearless actors play more than 100 characters throughout the course of the evening, moving from interior to exterior locations through the use of all manner of theatrical techniques from shadow puppetry, mime, physical theatre, even dance.

The use of props in The 39 Steps is hilarious from the start. Old leather suitcases become a steam-train carriage, fold-out painters’ ladders become the Forth Road Bridge, and a windowframe on wheels is turned into every dwelling imaginable. All of these devices are handled with complete skill by the cast, transforming the most banal of furnishings, such as a hat stand, into three Scottish farmers at a village meeting!

Ian Scott, the production’s lighting designer, helps things along by defining the space with light and giving the setting the appropriate atmosphere. Likewise, Mic Pool’s sound design colours each scene to match the suggested location – an owl hooting at night as they cross a misty moor or the crackle of a log fire in a remote farm cottage.

The standout aspect of the production though is the enormously talented cast of Ellie Beaven, Greg Haiste, Nick Holder and Ben Righton. The energy and commitment required to keep the play rattling along at the speed it does is quite some feat. In particular, Beaven’s portrayal of Annabella Schmidt, the grotesque German spy, is pant-wettingly funny due to the ridiculously strong German accent and femme fatale seduction of the naive Hannay.

Haiste and Holder are a double act worthy of comparison to Morecambe and Wise. They both change character in the blink of an eye, to the point where you would be forgiven for thinking the cast was far larger than a mere four actors. In one gloriously funny coup de theatre, the pair plays three different characters at the same time, using only a few hats and the mastery of accents.

The 39 Steps is a unique theatrical experience and the clever balance between silly slapstick and clever farce makes for a perfectly original – no, more – a sublime night at the theatre.