by Best of Theatre Staff on Thursday 18 November 2021, 9:37 pm in WhatsOnStage Awards 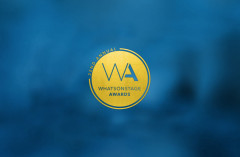 WhatsOnStage today announces that the 22nd Annual WhatsOnStage Awards will take place on Sunday 27 February 2022 at the Prince of Wales Theatre. As well as seeing the winners crowned across a range of categories, theatregoers will also enjoy a host of exclusive live performances from top West End talent. The event is co-produced with Paul Taylor-Mills and Sita McIntosh.

Now in their 22nd year, the WhatsOnStage Awards are the only major theatre awards decided by the theatregoers themselves.

Nominations are now open and will close on Friday 26 November 2021 ahead of the shortlists being announced. Voting then opens on Thursday 9 December 2021, closing on Friday 21 January 2022, with the winners being announced at the awards concert on Sunday 27 February 2022.

The shortlist for the technical categories (Choreography, Costume Design, Direction, Graphic Design, Lighting Design, Musical Direction, Set Design, Sound Design and Video Design) will be once again decided by an independent panel of industry experts appointed by WhatsOnStage. Their shortlists will then be voted on by the general public.

This year, WhatsOnStage will alter the eligibility for the performance categories. For each of the following:

Readers will be able to nominate two individuals per category. Once nominations have closed, WhatsOnStage will identify the names with the most votes and then compile the shortlist by liaising with those nominees to determine where they would prefer to be represented.

WhatsOnStage's Sarah Coleman said today: "It feels like a lifetime since we last came together at the Prince of Wales Theatre in March 2020 to celebrate that joyous, unbreakable link between performers and audiences. Our 21st Annual WhatsOnStage Awards earlier this year were a chance to find light amongst the darkness of lockdown, celebrate the kindness of our theatre community and highlight the remarkable digital innovation that has taken place during the pandemic, but as theatres reopen across the world we are itching to be back in the room where it happens next February for our 22nd round of awards. Who wins is now in your hands!"