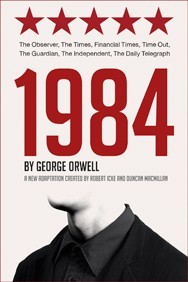 George Orwell’s world-famous novel of a terrifying dystopian future has had a wide and varied treatment on stage and screen, but it takes some doing to offer a brand new perspective on such a well-known story. However, director Rupert Goold and writers Robert Icke and Duncan Macmillan have cleverly created a fresh take on the politically relevant tale that makes for an intensely exciting evening at the theatre.

The play has been mostly set in a generic archive room filled with paperwork and files. A group of people are discussing and investigating a revolutionary book of fiction from the past and it’s called 1984. This framing device allows the show’s creators to quickly conjure the story and then return at whim to this odd book-club gathering, where they do the very thing Orwell warns may happen: they censor the language of the story and, through this, hope to control the public’s thoughts.

Director Rupert Goold and writers Robert Icke and Duncan Macmillan have cleverly created a fresh take on the politically relevant tale that makes for an intensely exciting evening at the theatre.

This double reality of the staging means that the audience is watching the events of the novel and then the reaction of the readers on stage. The production spares no prisoners and pushes the audience through disorientating memories, agonising flashbacks, distorted sounds, exploding lights and a Room 101 torture sequence that stays with you long after the curtain falls.

While bringing to light some deadly serious ideas about censorship and the erosion of individual liberty, Macmillan and Icke condense Orwell’s detailed narrative down to the thrilling central story of Winston and his rebellion against the sinister Big Brother through his forbidden love for fellow libertarian, Julia. These two central characters are fleshed out with rich detail and given time to develop, something that is often missed from many stage adaptations.

There are some excellent performances in 1984. Mark Arends’s emaciated and nervy Winston manages to be both lover and fighter. Hara Yannas oozes sensitivity and sensuousness in her portrayal of Julia, and the dull-looking O’Brien is given a deeply chilling industrious streak by Tim Dutton, who makes the skin creep when seen torturing a victim with his quietly efficient manner.

If only the cast was left alone to tell the story, because there are a few too many moments in this production of 1984 that rely on technical wizardry and stage tricks rather than the ability of the actors. The sound often overpowers the dialogue and the constant atmosphere-building drones are used so often that their ability to heighten tension is reduced by the familiarity of the sounds. The balance between concept and stage action is almost found, but it’s a little push too far and it detracts from the story being told.

Set designer Chloe Lamford has created a suitably drab institutional environment, but then reveals a white-walled torture room that sends chills down the spines of the assembled audience the moment it is disclosed. Lamford has collaborated closely with the production’s video designer, Tom Gibbons, to achieve the fluid transitions between past, present and future. This, mixed with Natasha Chivers’s bold sound design makes for a truly arresting and immersive experience that hits all the senses.

The unpredictability of the staging and set design make for thrilling viewing. For example, the romantic encounters between Winston and Julia in their snug bolt-hole are presented here by means of live video streamed onto stage, making us the audience just as complicit in the voyeuristic government monitoring.

For those looking for an exhilarating and stimulating piece of theatre, look no further.

The production does everything it can to bring out the fear and suspense of Orwell’s compelling novel, but what raises this version above many previous incarnations is how it seems utterly fresh and, above all, relevant. Running at just over an hour-and-a-half straight through without an interval, this adaption is not for those looking for a quiet evening’s entertainment. It is brutal, intense and jolting, almost relentlessly provoking the audience. However, for those looking for an exhilarating and stimulating piece of theatre, look no further.