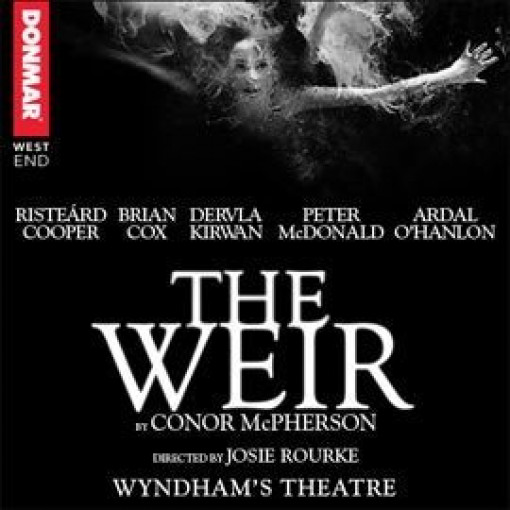 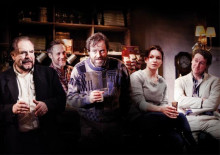 The Weir premièred in 1997, when it won awards from the Evening Standard and Critics’ Circle as well as a well-deserved Olivier Award for Best New Play. At the same time it helped establish the seriously talented writer Conor McPherson as a theatrical phenomenon, a creative force to be reckoned with, now widely considered one of Britain’s greatest living playwrights.

This production is by Josie Rourke, also critically acclaimed, and the play reunites the original and infamous crew at the Donmar Company. Always a hotbed of innovation and skill, Risteárd Cooper, Brian Cox, Dervla Kirwan, Peter McDonald and Ardal O’Hanlon have collaborated to deliver the very first major UK revival of a play that has audiences shivering in their seats. It’s well on the way to becoming an all-time modern theatre classic.

So what’s the story? It’s cold and stormy outdoors, but inside a remote Irish bar it’s cosy and warm. Four old mates have met for a lock-in, and soon settle into their usual comfortable storytelling mode as the night darkens and the drinks flow. All is well until a strange young woman turns up, a woman haunted by a secret from the past. She challenges the four friends to a ghost story-telling session and the evening slowly but surely takes a horribly dramatic turn. If the men thought they were in for a quiet night’s enjoyable drinking, they are in for a shock as things become ever more real and unsettling.

The designer is Tom Scutt, the Lighting Designer is Neil Austin, the Sound Designer is Ian Dickinson (for Autograph) and the Casting Director is Alastair Coomer CDG. The play is produced by Playful Productions and Donmar Warehouse.

What is the press saying? Metro calls The Weir “A production that holds you enthralled”. The Evening Standard calls it “A magnificent west end transfer”. The Financial Times says the transfer “Confirms its status as a contemporary classic in Josie Rourke’s beautifully acted revival”. The Times says it is “Every inch a modern masterpiece. It’s unnerving, moving, richly funny, richly human. And at 105 minutes straight through, it leaves you time for a drink afterwards”. The Daily Express says it’s “A treat for newcomers to the play and a chance for those who know it to savour its emotional profundities afresh”, and the Daily Telegraph calls it “One of the best plays of the past century”.

That’s what we call great reviews! If you fancy being deeply unnerved, thoroughly spooked and very well entertained indeed, it’ wise to secure your tickets before they all fly off the shelf.

The Weir tickets – Book if you dare!

If you’d like to secure super-spooky The Weir cheap tickets, we offer the full range of seating types, from low cost to premium, all with excellent availability. We dare you!