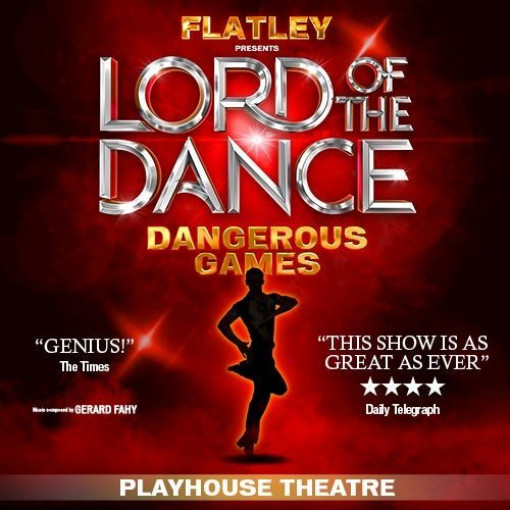 Lord of the Dance: Dangerous Games

The brilliant, amazing, legendary, multi award-winning, record-breaking creator of the smash hit dance show Riverdance is back on the London stage for the very last time with the most spectacular show... ever! It's Lord of the Dance Dangerous Games, and it's set to thrill audiences with its absolutely breathtaking choreography.

Head for the Dominion Theatre to enjoy a spectacular event that'll amaze and delight dance fans of all ages. It's just one in a series of short-season shows planned to take the venue back to its traditional variety roots, and it's already causing a stir in the media. It's on for just eight weeks, a flash in the pan, so if you're a dance fan don't delay buying tickets.

Flatley made Celtic dance famous, bringing it bang up to date by creating spectacular shows with an incredibly wide appeal. The show takes to the stage at the Dominion between 13th March and 5th September 2015, the perfect accompaniment to help you enjoy 2015 to the full.

The star of the show, Flatley himself, is stepping back this time to let a stellar cast of younger, equally talented dancers shine through. Taking a smaller role, he has assembled a mighty cast of forty young dancers to weave a compelling story of good versus evil, inspired by an ancient Irish folk tale, where the 'Little Spirit' time travels to and fro to help a nobleman defend himself and his people from the evil Don Dorcha, the Dark Lord.

What can you expect? You'll love Flatley's compelling blend of traditional Irish and contemporary dance, infinitely fascinating and so skilful it'll leave you breathless. The LA Times has called it a 'show piece extravaganza', and it's a genuinely magical adventure of sight and sound. You'll be transported to a mythical time and place for an unforgettable show that'll lift your spirit from start to finish.

Love, danger, desire... it's heady stuff and recommended for people aged five upwards. No babies allowed. Michael Flatley himself will not be appearing in the matinee performances and Nadine Coyle won't be in every performance. But the remarkable troupe the master himself has put together are so amazingly talented that you won't notice. An epic show, it's set to be an epic hit.

Lord of the Dance tickets – Full of mystery and darkness, love and desire

If you’d like to treat yourself to Lord of the Dance cheap tickets, we offer the full range of seating types, all with really good availability.

Was £30.00 Now £12.00
Valid all performances between 5-24 January 2016. Please note that there is limited availability for Saturday and Sunday performances. Only 10 tickets per performance available.