by Best of Theatre Staff on Thursday 9 February 2017, 3:28 pm in Upcoming and New Shows 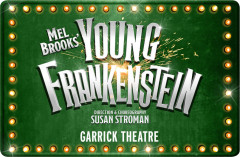 Mel Brooks’ YOUNG FRANKENSTEIN - the new comedy musical based on the Oscar-nominated smash hit movie - will open in the West End on Thursday 28 September at the Garrick Theatre (Press Night: Tuesday 10 October). Tickets go on-sale tomorrow, Friday 10 February. The production will open for a pre West End season at the Theatre Royal Newcastle from Saturday 26 August to Saturday 9 September.

The London run for Young Frankenstein is announced in the week that Mel is to be awarded the BAFTA Fellowship, the highest honour that the Academy bestow and a lifetime achievement recognising his remarkable career across the arts.

Young Frankenstein, the wickedly inspired re-imagining of the Mary Shelley classic, sees Frederick Frankenstein, an esteemed New York brain surgeon and professor, inherit a castle and laboratory in Transylvania from his deranged genius grandfather,Victor Von Frankenstein. He now faces a dilemma - does he continue to run from his family’s tortured past or does he stay in Transylvania to carry on his grandfather’s mad experiments reanimating the dead and, in the process, fall in love with his sexy lab assistant Inga?

Based on the hilarious 1974 film and co-written with Thomas Meehan, Brooks will once again collaborate with Broadway director and choreographer Susan Stroman for this all-singing all-dancing new production, bringing his and Gene Wilder’s classic movie to life on stage.

Casting will be announced at a later date.