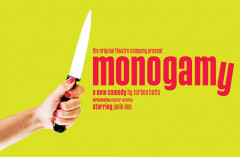 The Original Theatre Company and Ghost Light Productions will present a short tour ahead of a London run of Torben Betts’s new play MONOGAMY, starring Janie Dee as Caroline Mortimer. MONOGAMY will run at the Festival Theatre in Malvern from 2-5 May 2018, Yvonne Arnaud in Guildford from 8-12 May 2018 and York Theatre Royal from 22-26 May 2018, ahead of a limited 5-week run at Park Theatre in London from 6 June to 7 July 2018, where there will be a national press night on Monday 11 June. Further tour venues and casting to be announced.

Janie Dee is currently starring in the National Theatre’s critically acclaimed production of Stephen Sondheim’s Follies. Her other West End credits include Carousel (National Theatre), for which she won the Olivier Award for Best Performance in a Supporting Role in a Musical, Comic Potential (Lyric Shaftesbury), for which she won the Olivier, Evening Standard, Critic’s Circle, Obie and Theatre World Awards for Best Actress, Mack & Mabel (Criterion Theatre), My One and Only (Piccadilly Theatre), Betrayal (Duchess Theatre), Noises Off (The Old Vic),Hand to God (Vaudeville Theatre), Blithe Spirit opposite Dame Angela Lansbury (Gielgud Theatre) and Calendar Girls (Noël Coward theatre). Her TV credits include Suki in the TV film version of Harold Pinter’s Celebration, Emma Lavenham in the Adam Dalgliesh TV mini-series Death in Holy Orders and The Murder Room, and regular character Remy in London’s Burning (ITV).

Caroline Mortimer, the nation’s favourite TV cook, has it all: a sparkling career, a big house in Highgate, a (golf) loving husband, smart kids and the best kitchen money can buy. But beneath the immaculate furnishings and studio lighting and away from the glare of the ever-present cameras, Caroline must face the looming collision of living a private life in the public eye. What happens when the cameras turn off and the truth comes out?

Torben Betts said of his new play, “I'm delighted that The Original Theatre Company and Ghost Light Theatre Production are producing my new play after they did such a fine job with their two touring productions of Invincible. I'm also very much looking forward to working with Janie Dee again after she starred in my adaptation of The Seagull at Regent's Park Open Air Theatre a few years ago. There are elements of that play in MONOGAMY, in that it's about, amongst other things, the conflict between an unhappy middle-aged celebrity and her angry son who feels very much at war with the modern world.

“As with Invincible I have attempted to take the pulse of the nation and, though I don't offer a cure for the self-evident sickness, I hope I have come up with a play which will make people laugh as much as it might prompt them to ask themselves some uncomfortable questions about the way we are living our lives right now.”

Torben Betts was born in Lincolnshire and studied at Liverpool University. He became the resident dramatist at Scarborough’s Stephen Joseph Theatre in 1999. Poet and dramatist Liz Lochhead said Betts "is just about the most original and extraordinary writer of drama we have." His play The Unconquered won Best New Play 2006/07 at the Critics’ Awards for Theatre in Scotland. 2015 saw a revival of his acclaimed 2012 play Muswell Hill at London's Park Theatre, his latest work, What Falls Apart, opened at Newcastle's Live Theatre, and his version of Chekhov's The Seagull was staged at Regent's Park Open Air Theatre. In February 2016, Betts adapted Get Carter for Northern Stage in Newcastle, running in tandem with The Original Theatre Company’s UK tour of his critically acclaimed Invincible, which, earlier this year, had a month-long run at the 13th annual Brits Off Broadway festival in New York City.

MONOGAMY will be directed by Alastair Whatley, with design by James Perkins and lighting by Chris Withers. The national tour is produced by Tom Hackney for The Original Theatre Company and Freddie Ryecart for Ghost Light Theatre Production.