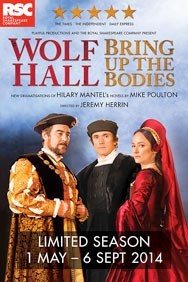 The Royal Shakespeare Company’s smash-hit adaptations of the award-winning Wolf Hall and Bring Up the Bodies by novelist Hilary Mantel is due to transfer to the Aldwych Theatre in London’s West End from 1 May 2014.

The epic story of Wolf Hall and Bring Up the Bodies charts the meteoric rise to power and fame of Thomas Cromwell in the Tudor Court. Full of political sabotage and illicit love affairs, the production has been unanimously praised by audience and critics alike. Rumours of a West End transfer have been circulating for a while, but it seems that it all hinged on a theatre becoming available.

The double bill is currently running in repertory at the RSC’s home in Stratford-upon-Avon until 29 March before it comes into the West End on 1 May. The current production calling the Aldwych Theatre home is Andrew Lloyd Webber’s new musical Stephen Ward, which will close on the 29 March 2014 to make way for the Royal Shakespeare Company.

Bring Up the Bodies tickets