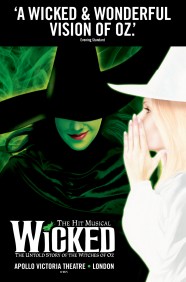 On 16 November, Wicked, the smash hit musical that tells the incredible untold story of the Witches of Oz, played its landmark 3,000th performance at London’s Apollo Victoria Theatre. Now in its eighth year, Wicked has surpassed the run of the musical Evita, becoming the 15th longest-running West End musical of all time.

UK Executive Producer Michael McCabe said, ’This is a fantastic milestone for the London production of Wicked. We are incredibly grateful to all those who have supported and championed the show since 2006 and thank everyone at the Apollo Victoria Theatre for all their exceptional work and dedication in delivering 3000 absolutely superb performances.’

The musical, based upon ‘Wicked: The Life and Times of the Wicked Witch of the West’, ingeniously and wittily re-imagines the Land of Oz and creates a parallel universe to the familiar story of the well-known classic ‘The Wonderful Wizard of Oz’.

In addition to celebrating this landmark anniversary, to meet the high demand for tickets Wicked has now added 5 additional Christmas matinees on 23, 27, 29, 31 December 2013 and 2 January 2014, all at 2.30pm. Tickets are now on sale.