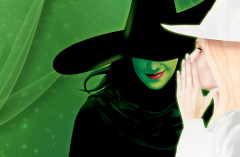 Wicked, the West End and Broadway musical phenomenon that tells the incredible untold story of the Witches of Oz, tonight (28 September 2021) celebrates 15 years at London’s Apollo Victoria Theatre. The award-winning production will play a celebratory performance attended by the composer and lyricist Stephen Schwartz together with a host of former cast members.

“I'm thrilled to be in London and in the audience at the Apollo Victoria Theatre as Wicked celebrates its 15th anniversary. The amazing emotion and euphoria from the audience on the night the show resumed performances on Broadway made clear to us all the magic that only the shared experience of live theatre can deliver. I am so excited to feel the response from London audiences, especially on this landmark occasion, and I very much hope the show will help drive a revitalized West End.”

“On behalf of David Stone, Marc Platt, Universal Stage Productions and all of the producers, I would like to offer our heartfelt thanks to all of our exceptionally talented casts, musicians and production staff who have worked so tirelessly and passionately on Stephen Schwartz and Winnie Holzman’s extraordinary musical since our London premiere in 2006. As we celebrate the incredible milestone of 15 years - as well as the reopening of theatres and return of live performances across the country – we also offer our deepest gratitude to our audiences who have so enthusiastically and unwaveringly supported and championed Wicked since our very first performance.”

Wicked has already been seen by almost 30,000 people across just the 13 performances it has played since resuming performances at the Apollo Victoria Theatre on 15 September 2021. The Broadway production, which will celebrate its 18th Birthday next month, resumed performances the night prior, on 14 September 2021, and the North American Tour, which has to date been seen by more than 20 million people and toured for more than 1,000 weeks, resumed on 3 August 2021.

Over the past 15 years, Wicked has attained many accolades and achieved numerous milestones to become “one of the biggest hits of our age” (The Observer):

Tickets are currently on sale for all performances to Sunday 22 May 2022. Wicked plays Tuesday-Saturday evenings at 7.30pm with matinees on Wednesday, Saturday and Sunday at 2.30pm. Visit https://www.bestoftheatre.co.uk/wicked for information and tickets.

Wicked imagines a beguiling backstory and future possibilities to the lives of L. Frank Baum’s beloved characters from The Wonderful Wizard of Oz and reveals the decisions and events that shape the destinies of two unlikely university friends on their journey to becoming Glinda The Good and the Wicked Witch of the West.

Wicked has music and lyrics by multi-Oscar, Golden Globe and Grammy Award winner Stephen Schwartz (Godspell, Pippin, The Prince of Egypt; Disney’s Pocahontas, The Hunchback of Notre Dame and Enchanted) and is based on the novel Wicked: The Life and Times of the Wicked Witch of the West by Gregory Maguire and written by Winnie Holzman. Musical staging is by Tony Award-winner Wayne Cilento with direction by two-time Tony Award-winner Joe Mantello.