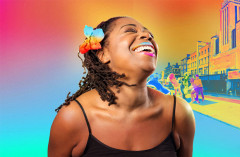 ‘You’re in Kilburn. Melting pot where nothing’s actually melted it’s all just kinda stuck together at the bottom in a gooey mess, know what I mean?’

Rosie Jones, the Iqbal twins, their parents, their grandparents, Mad Mary and an avalanche of other characters who make up the everyday chaos of Kilburn High Road come together in an extraordinary revelry of NW6. An epic comedy with music and dance, this theatrical rollercoaster takes us on a fast-paced journey through history, different cultures and chance encounters.

Michele Austin returns to the theatre to play Mad Mary – she previously appeared in The House That Will Not Stand and The Riots. Her other theatre work includes Instructions for Correct Assembly, Breath Boom, Been So Long (Royal Court Theatre), The Seagull (Lyric Theatre Hammersmith), Medea (Almeida Theatre), Pride and Prejudice (Sheffield Theatres), I Know How I Feel About Eve, Out in the Open (Hampstead Theatre), To Kill a Mockingbird (Regent’s Park Open Air Theatre), Sixty-Six Books (Bush Theatre), Generations (Young Vic), and Our Country’s Good (Out of Joint/Young Vic). For television, her work includes Dark Heart, The Coroner, Casual Vacancy, Death in Paradise, Harry & Paul, Secret Life, The Canterbury Tales and Gimme Gimme; and for film, The Children’s Act, What We Did on Our Holidays, Parking Wars, Another Year, The Infidel, Valentine’s Day, All or Nothing and Secrets and Lies.

Matthew Churcher is an actor-musician. His theatre work includes The Great Gatsby (Theatre Clwyd and Halifax), Jane Eyre (National Theatre and UK tour), All or Nothing (UK tour), War Horse (New London Theatre and National Theatre), Ignition: 60 Hugs (Frantic Assembly), and Loaded (Out of Inc). His short films include Ken Loach’s Star Wars. He is also a professional drummer/percussionist and has performed at the Royal Albert Hall, BBC and toured both nationally and internationally.

Naomi Frederick plays Ruth/Poppy/Joyce Chalfen. Her theatre work includes Agnes Colander, The Mentor and Hobson’s Choice (Theatre Royal Bath), The Heresy of Love, Much Ado About Nothing (Shakespeare’s Globe), Made in Dagenham (Adelphi Theatre), Emil and the Detectives, Mrs Affleck, Henry IV Parts 1 and 2, The Mandate (National Theatre), The Winslow Boy (The Old Vic), The Master Builder (Chichester Festival Theatre) and Measure for Measure (National Theatre and Complicité – Ian Charles Award 2nd Prize). For television, her work includes Inspector George Gently, Virtuoso, My Family, On Expenses, and The Trial of Tony Blair; and for film, The Aftermath and The Children’s Act.

Richard Lumsden plays Archie Jones. His theatre work includes It’s All Made Up (Royal Court), Uncle Vanya, Our Town (Almeida Theatre), Fall and Rise of Lenny Smallman (Arts Theatre, Mill Theatre), We Could Be Heroes (Bridewell Theatre) and Glory of the Garden (Duke of York’s Theatre). For television, his extensive credits include Shakespeare and Hathaway, Doc Martin, Millie Inbetween, Crazyhead, Father Brown, Trollied, Remember Me, All at Sea, Vexed, Life of Riley and Garrow’s Law; and for film, Darkest Hour, The Heart of Lightness, Downhill, City Slackers, Silent Cry, Room to Rent, The Avengers and Sense and Sensibility.

Nenda Neurer is an actor-musician and also plays Clara Jones. She represented Rose Bruford at the 2017 Sam Wanamaker Festival, playing Vittoria in The White Devil. Her other theatre credits include Jerusalem, The Borrowers (The Watermill Theatre) and Romeo and Juliet (Orange Tree Theatre).

Zoe West is an actor-musician. Her theatre work includesThe Lost Ones (Bush Theatre), Sleeping Beauty (Theatr Clwyd), Creatives (The Pleasance, Edinburgh) and Constance and Sinestra (The Ugly Duck, London Bridge). She is also a singer songwriter and played at Billy Bragg’s Left Field at Glastonbury in 2017.

Zadie Smith was born in north-west London in 1975. She is a fellow of the Royal Society of Literature and has twice been listed as one of Granta’s 20 Best Young British Novelists. Her first novel, White Teeth, was the winner of The Whitbread First Novel Award, The Guardian First Book Award, The James Tait Black Memorial Prize for Fiction, and The Commonwealth Writers’ First Book Award. Her second novel, The Autograph Man, won The Jewish Quarterly Wingate Literary Prize. Zadie Smith’s third novel, On Beauty, won the Orange Prize for Fiction, The Commonwealth Writers’ Best Book Award (Eurasia Section) and was shortlisted for the Man Booker Prize. Her fourth novel, NW, was shortlisted for the Royal Society of Literature Ondaatje Prize and the Women’s Prize for Fiction. Her most recent novel, Swing Time, was published in November 2016 and has been shortlisted for the National Book Critics Circle Award for Fiction. She published an essay collection, Changing My Mind, in 2009; a second collection, Feel Free, was published in 2018. Zadie Smith writes regularly for the New Yorker and the New York Review of Books and is a tenured professor of creative writing at New York University.

Stephen Sharkey has translated and adapted a wide variety of classic and classical stories for the stage, including works by Euripides, Aristophanes, Wilde, Defoe, Charlotte Perkins Gilman, Dostoevsky, Dickens and Goncharov. His most recent work includes Inkheart – adapted with Walter Meierjohann for HOME, a version of Brecht’s The Resistible Rise of Arturo Ui and Feydeau’s Sex and the Three Day Week, both commissioned by Liverpool Everyman and Playhouse, and an adaptation of A Christmas Carol (Northern Stage). He wrote three further Christmas shows for Northern Stage: Hansel and Gretel, Peter Pan and The Glass Slipper. His translation of Ion by Euripides was produced by the Gate Theatre, London, and he reworked Birds by Aristophanes as a musical comedy for children called Cloudcuckooland which toured the UK. His play The May Queen was produced by Liverpool Everyman and Playhouse. He has also written plays for BBC Radio 4: the first of these All of You on the Good Earth won the Society of Authors’ Richard Imison prize for best radio debut.