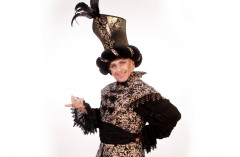 Cambridge Arts Theatre is delighted to announce that world-renowned ballet dancer, choreographer and TV personality Wayne Sleep OBE will lead the cast of its 2018 family pantomime, Aladdin, in the role of Abanazar from 29 November to 6 January 2019.

Sleep is best known for his legendary career at the Royal Ballet, achieving a coveted scholarship which led him to become a senior principal dancer for the company. Sleep famously set a world record by performing an entrechat-douze – the most jumps ever completed by in the step. His stage credits include originating the role of Mr Mistoffelees in Lloyd Webber’s musical Cats in the West End, The Child Catcher in Chitty Chitty Bang Bang and over 20 pantomimes. Notable recent TV appearances include The Chase, Celebrity Big Brother and The Real Marigold Hotel.

Sleep is joined by acclaimed stage and television actress Liza Goddard as the Empress, who returns to Cambridge following her Arts Theatre appearance as Fairy Beansprout in 2017’s Jack and the Beanstalk. Goddard is much loved for her roles as the glamorous jewel thief Philippa Vale in Bergerac, Mrs Jessop in Woof! and Clarissa 'Clancy' Merrick in Skippy the Bush Kangaroo, as well as numerous stage roles.

Cambridge's #1 pantomime dame, the hilarious Matt Crosby will take centre stage as Widow Twankey, in his thirteenth pantomime at the Arts Theatre.

Suzie Mathers makes a welcome return to Cambridge as the Princess, following her role as the title character in 2015’s Cinderella. A world-class theatrical performer, Mathers is best known for her acclaimed role as Glinda the Good Witch in the Australian, Asian and London productions of Wicked.

Andy Abraham makes his Arts Theatre debut in the role of the Genie. Abrahams rose to fame on the world-famous TV show X Factor in 2005. With his soulful voice and down to earth personality audiences branded him the ‘voice of the people’. He has since released four albums and performed in theatre hits including the West End’s Respect La Diva and Godspell.

Completing the cast are Holly Easterbrook (Jack and the Beanstalk, Dick Whittington) as our fortune seeker Aladdin and ventriloquist Max Fulham makes his debut in Cambridge as Aladdin’s brother Wishee Washee.

Aladdin is directed by Phil Clark, who boasts over 40 years’ experience as a professional theatre director and writer. His previous productions include Horrible Histories Live on Stage, Roald Dahl stage adaptations The BFG and George’s Marvelous Medicine, as well as numerous pantomimes across the country.

Aladdin is produced by Dave Murphy, written by Al Morley, choreographed by Kevan Allen, lightening design by Mike Robertson, sound design by Orbital Sound and musical arrangement by Will Stuart.