Final Casting announced for TWO LADIES at the Bridge Theatre 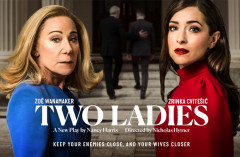 Lorna Brown, Raghad Chaar and Yoli Fuller join the previously announced Zoë Wanamaker and Zrinka Cvitešić to complete the casting for Two Ladies, a new play by Nancy Harris to be directed by Nicholas Hytner at the Bridge Theatre.

Two Ladies previews from 14 September 2019 with opening night on 25 September. This strictly limited 6-week run will conclude on 26 October 2019. Set and costume designs are by Anna Fleischle withlighting by Johanna Town, sound by George Dennis and music by Grant Olding.

As their husbands clash over an international crisis, the first ladies of France and America find themselves alone together in a side room. Friends, or enemies? When the stakes are so high, can they trust each other? Can they trust their husbands?

Zoë Wanamaker (Hélène) was last on stage as Meg in Harold Pinter’s The Birthday Party at the Harold Pinter Theatre. She has had a much-celebrated career working for the National Theatre, the Royal Shakespeare Company, the Royal Court Theatre and the Donmar Warehouse as well as in the West End and on Broadway. Her many television credits include My Family, Poirot and Mr Selfridge as well as Killing Eve, Britannia and Girlfriends. Her many film credits include My Week with Marilyn, It’s a Wonderful Afterlife, Wilde and Harry Potter and the Philosopher’s Stone. As well as being the recipient of numerous awards and nominations, Wanamaker was appointed a CBE for her services to Drama.

Croatian born Zrinka Cvitešić (Sophia) was last on stage in London playing ‘Girl’ in the UK premiere of Once for which she received the Olivier Award for Best Actress in a Musical. As a member of the Croatian National Theatre her roles have included Maggie in Cat on a Hot Tin Roof, Natasha Rostova in War and Peace, Gwendoline in The Importance of Being Ernest, Irina in Three Sisters and Juliet in Romeo and Juliet. Her television credits include Capital and London Spy. Her film credits include On the Path for which she was the first Croatian actress to win the Shooting Star Award at the Berlin Film Festival and a nomination for European Film Academy Award for Best Actress, My Beautiful Country for which she won the Bernhard Wicki Award (German Award for Culture) and What Is a Man Without a Moustache for which she won Sarajevo Film Festival Award for Best Actress. In 2017 she was honoured with a Medal of Honour by the President of Croatia.

Lorna Brown (Sandy)was last on stage in the Royal Shakespeare Company production of Hamlet. Her other theatre credits include Wings at the Young Vic, Bodies and Torn at the Royal Court Theatre, Medea, Blurred Lines, Damned by Despair at the National Theatre and The Oresteia at the Almeida Theatre and Trafalgar Studios. Her television credits include The Devils, Chewing Gum, Press, The Catherine Tate Show and French and Saunders. Her film credits include The Jungle Book, The Lady in the Van, Les Misérables and World War Z.

Raghad Chaar (Fatima) made her professional stage debut in How to Hold your Breath at the Royal Court Theatre. Her television credits include The State and Collateral.

Yoli Fuller (Georges) made his UK stage debut in Mosquitoes at the National Theatre. His previous theatre credits, all in France, include The Tragedy of Hamlet, B.A.B.A.R (Le Transparent Noir), Pushup, Les Trois Mousquetaires, Huckleberry Finn and Espejo. On television his credits include ITV’s The Widow, BBC One’s Silent Witness and the Netflix original series No Second Chances.

Playwright Nancy Harris was born in Dublin. Her plays include The Beacon, No Romance, Our New Girl, Love in a Glass Jar, Baddies: The Musical, Journey to X, The Kreutzer Sonata and an adaptation of Hans Christian Andersen’s The Red Shoes. Harris received The Rooney Prize for Irish Literature and The Stewart Parker Award for her debut full-length play No Romance in 2012. She was a finalist for the Susan Smith Blackburn Award. She has also written for radio and television and was nominated for a BAFTA as a Breakthrough Talent in 2014 for her writing on the Channel 4 series Dates.

Nicholas Hytner co-founded the London Theatre Company with Nick Starr. He was Director of the National Theatre from 2003 to 2015, where the productions he directed included The History Boys, Hamlet, One Man, Two Guvnors, and Othello. His films include The Madness of George III, The Lady in the Van and The History Boys. Hisbook Balancing Acts is published by Jonathan Cape. For the Bridge, Hytner has directed Young Marx, Julius Caesar, Allelujah! and Alys, Always. His immersive production ofA Midsummer Night’s Dreamcontinues at the Bridge until 31 August.