The Turbine Theatre announces Dr Seuss's THE CAT IN THE HAT 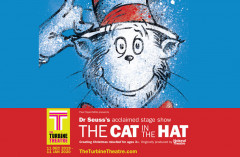 Based on the much-loved tale by Dr Seuss, Katie Mitchell’s acclaimed stage adaptation of The Cat In The Hat, opens at The Turbine Theatre, Battersea, for a strictly limited Christmas season.

Offering the perfect festive show for young children’s first theatre experience, this lively and engaging family show runs from 11 December – 11 January, with press night on Thursday 12 December. The production is directed by Lillie Collier, with designs by David Shields. Further creatives and full casting will be announced in due course.

From the moment his tall, red-and-white-striped hat appears around the door, Sally and her brother know that the cat in the hat is the funniest, most mischievous cat they have ever met.

With the trickiest of tricks and craziest of ideas, he turns a rainy afternoon into an amazing adventure. But what will mum find when she gets home?

The Cat In The Hat was first published in 1957 as Dr Seuss's second book for children. It marked the transition of Theodor Seuss Geisel from successful advertising executive and political cartoonist, to world-famous illustrator and children's author. The curious and intricate rhyming found in The Cat In The Hat is still adored decades later with over 250 million copies sold worldwide in more than 20 different languages. Katie Mitchell’sstageadaptation of The Cat In The Hat first played in the National Theatre's Cottesloe Theatre in December 2009, before transferring to the Young Vic in 2010, and returning in a new staging at the 2014 Edinburgh Fringe Festival and Pleasance Theatre, Islington and subsequent UK tour in 2015.

The Cat In The Hat forms part of the Turbine Theatre’s inaugural season, which opened August 2019 with Harvey Fierstein’s groundbreaking play, Torch Song, directed by Olivier Award winning director/choreographer, Drew McOnie. The second production, UK premiere of new musical comedy High Fidelity, based on the acclaimed novel by Nick Hornby and directed and choreographed by Tom Jackson Greaves, is currently running at the Turbine until 7 December.