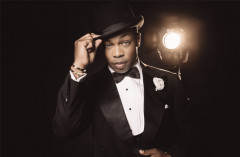 Star of RuPaul’s Drag Race, American Idol and YouTube sensation Todrick Hall will star as Billy Flynn in CHICAGO from 19 November 2018 until the end of the show’s run at the Phoenix Theatre on 5 January 2019.

Todrick Hall first rose to fame as a semi-finalist on the ninth series of American Idol. He joined YouTube in 2006 where he now has 2.9 million subscribers with his videos being viewed over 593 million times. In 2016 he appeared as a guest judge on RuPaul’s Drag Race, later appearing as a full-time judge for RuPaul’s Drag Race: All Stars 2 and again for the ninth season last year. No stranger to theatre he as appeared on Broadway as Billy Flynn in Chicago and Lola in Kinky Boots.