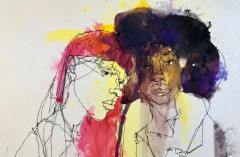 “Eyes smarting,
Heart aching,
From the pangs of first love.”

Seventeen-year-old Luke runs away to London – away from homophobic playground slurs, headlines that scream ‘Don’t Teach Our Children To Be Gay’ and a family who wouldn’t understand him – to Uncle Martin, who he once saw with his arms around another man at a march.

In the capital, Mark is sacked because of fears about colleagues working with ‘someone like him’. His boyfriend, Selwyn, faces being beaten up both by the police and at home by his own stepbrother. Meanwhile, Debbie battles with her son, who doesn’t want to live with her and her girlfriend. And retired piano teacher Miss Rosenblum – who once found refuge in this country from a terror that swept away half her family in 1930s Vienna – has seen this sort of hatred and fear before.

This Island’s Mine was originally performed by Gay Sweatshop in 1988. Now, three decades after the introduction of Section 28 banning positive representations of homosexuality, Philip Osment’s passionate and lyrical play, of outsiders, exiles and refugees, is all too resonant.

Philip Osment is a writer and actor. His writing credits include the trilogy The Dearly Beloved, What I Did In The Holidays and Flesh and Blood (all of which were nominated for Writers’ Guild awards), Buried Alive, Little Violet And The Angel (co-winner of the Peggy Ramsey award), Wise Guys (nominated for TMA and Manchester Evening News Best Play awards), Leaving,Collateral Damage, Fathers Inside and Whole. Osment also translated Pedro The Great Pretender (Cervantes), George Dandin (Moliere), and Kebab (Carbunariu). As an actor, he has performed with leading alternative theatre companies including The Half Moon, Shared Experience and Gay Sweatshop.

Connor Bannister plays Luke. His theatre credits include Let It Be (UK tour), All or Nothing (Ambassadors Theatre) and Floyd Collins (Wilton’s Music Hall).

Philip Wilson directs and designs. He spent four years as the Artistic Director of Salisbury Playhouse (2007-2011). During his tenure his directing credits include The Game of Love and Chance, The Constant Wife, The Picture, Private Lives, Arsenic and Old Lace and The Winslow Boy. He is the recipient of the 1995 Regional Theatre Young Director Scheme bursary and the inaugural 2015 David Fraser/Andrea Wonfor Directing for Television bursary. His other directing credits include Perfect Nonsense, After The Dance (Theatre By The Lake), A Fox on the Fairway (Queen’s Theatre Hornchurch), Grimm Tales (Shoreditch Town Hall, Oxo Bargehouse, Unicorn Theatre), The Star, The Norman Conquests, Noises Off, Dr Faustus, The Astonished Heart/ Still Life (Liverpool Playhouse), As You Like It (Storyhouse Chester), Beacons (Park Theatre).