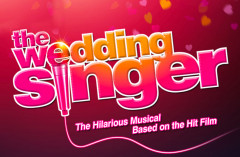 Based on the 1998 Hollywood Blockbuster film of the same name starring Adam Sandler and Drew Barrymore, “THE WEDDING SINGER” features music from the Tony Award nominated composer of ‘Elf the Musical’ and ‘The Prom’ Matthew Sklar, lyrics by Chad Begeulin and a book by Chad Beguelin and Tim Herlihy.

After thrilling audiences in the UK tour of ‘Rock of Ages’this year Kevin Clifton will return to the stage to play ‘Robbie Hart’ in “THE WEDDING SINGER” in 2020. Kevin Clifton is an international Ballroom and Latin dancer and has won numerous titles, including the British Latin Championships four times. He is best known as a Pro Dancer on BBC One’s, ‘Strictly Come Dancing’ and is the only pro dancer to ever dance in four consecutive finals. Kevin is the current reigning champion having won with Stacey Dooley in 2018. He made his musical theatre debut in ‘Dirty Dancing the Musical’ at the Aldwych Theatre in London’s West End and went on to become a principle dancer in Burn The Floor Dance Company performing in the West End, on Broadway and across the world.

It's 1985. Hair is huge, greed is good and rock-star wannabe Robbie Hart is New Jersey's favourite wedding singer. When his own fiancée dumps him at the altar a seriously bummed out Robbie makes every wedding as disastrous as his own. Can sweet natured Julia and her best friend Holly lure Robbie out of the dumpster and back into the limelight? Or is he going to see her head off down the aisle with Wall Street bad boy Glenn?

“THE WEDDING SINGER” has a book by Chad Beguelin and Tim Herlihy, music by Matthew Sklar and lyrics by Chad Begeulin. It is directed and choreographed by Nick Winston, designed by Francis O’Connor, lighting design is by Ben Cracknell, sound design is by Ben Harrison, musical supervision is by Sarah Travis, orchestration is by George Dyer and Casting Director is Jim Arnold CDG.